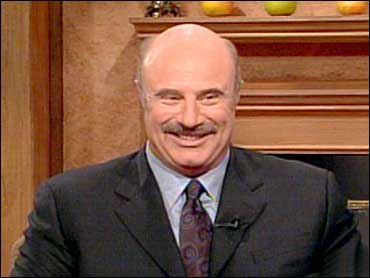 Talk show host and best-selling author Dr. Phil McGraw is known for his no-nonsense style. There's plenty of that on display in his second prime-time special, "Romance Rescue."

On the show, he tries to help romantically challenged couples and singles turn things around.

One example is an attractive, successful woman who has no trouble getting first dates, but rarely is called for a second.

Th show actually tapes her on a date, then shows the tape to her and a panel of men. McGraw then guides her through another date, with the help of an earpiece she wears so she can hear his advice.

McGraw says she was "very attractive in terms of her looks, her personality, her intelligence, her lifestyle. But the problem is, sometimes, it leaves no room for a guy. A guy meets her and is so overwhelmed and so intimidated by her competence, it's like, 'I have nothing to offer this woman.' So they pull back."

Why is she sending wrong signals on dates?

"I think," McGraw says, "it's to be safe. Clearly, she's in a male-dominated industry, in sales. She's competitive with men all of the time. To be vulnerable, to let them get close, is scary to her. She's got to section off the difference between the work world and the not-work world."

"The first thing," McGraw says, "is we go into it sometimes with unrealistic expectations. I think you need to realize that the relationship is a building thing. It's a slow turn. ...We have all this "power dating," living in the laser lane. I think you just need to go in and be who you are and see if the things click or if they don't.

"Everyone says, 'All of the good ones are gone. I can't meet anybody. That's clearly a problem, but also, once you get into a relationship, we sometimes say, 'If we're in love, we shouldn't have to work at this, right?'

"That's not true. You always have to work at your relationship."

McGraw told of a women he just interviewed who's been married 50 years. He asked what her and her husband's secret to success is.

"She gave a good answer," McGraw noted. "She said, 'We never fell out of love at the same time.'"

Of course, the "S"-word is a big concern in marriages.

"A lot of people worry that, once they get married, the wheels are just going to come off, sexually," McGraw tells Smith, "and in this prime-time special, we talked to a couple that is really on the brink, trying to negotiate the last things before they walk the aisle. And then we talked to a couple that's been married for a number of years and gotten into some bad patterns."

One of the couples featured on "Romance Rescue" is Jonathan and Victoria from "Amazing Race 6."

Smith describes Jonathan's behavior toward Victoria through the whole show as "reprehensible."

McGraw says Jonathan "is really, probably, at his core, a decent human being, but I think he's just terribly insensitive and believes that some of these things are OK in the right context. What he says is, the pressure was on. But it's not about pressure. It's about priorities. And I think he's made some really, really bad decisions.

"So you're going to see me ask him some really hard questions, and you'll see me ask her, 'America wants to know, why is this OK with you? Why are you willing to do that?' "

McGraw says people approaching marriage focus on the wrong areas: "They plan the wedding, bridesmaid dresses, cake, catering, all that -- but they don't plan the marriage. They don't talk about things like sex, religion, the division of labor, how they're gonna spend the money, geography, what they'll do with in-laws. Those are conflicts that, if you resolve ahead of time, you've got everything done" that really matters.

Something else to look out for: "People argue about topic, not issues. They'll pick some safe topic like, 'You left the tricycle in the driveway, and I had to get out and move it,' when, what they're really frustrated about is, they feel rejected. They don't have a soft place to fall. They don't feel like their partner's still attracted to them sexually. But you don't want to talk about those things, because they're too threatening to your ego. So you substitute in something else that's safer."

Americans, McGraw observes, need help when it comes to romance: "I think everybody could improve in this area. Men need a lot of romance rescue because men are very confused about what is romantic with a woman. Men sometimes think it's flowers and candy twice a year, and it's really not. One of the most romantic things you could do for a woman is to bathe the kids that night. Do the dishes and let her decompress a little bit. Those are the important things."