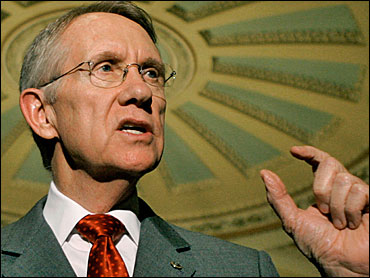 A day after The Associated Press reported Reid accepted free ringside seats to boxing matches from a Nevada agency trying to influence him on federal boxing legislation, the senator offered his own ethics justification to a home state audience in Las Vegas.

And he vowed to keep taking such gifts.

But Reid's comments Tuesday quickly reached Washington, where several ethics experts concluded the Senate leader had misstated the Senate rules to his constituents.

Within hours of being questioned by AP about the ethics experts' assertions, Reid's office abruptly reversed course and acknowledged Wednesday night he had misspoken about the ethics rules.

The Senate leader also has decided not to take free boxing seats in the future even though he still believes it was ethical to do so in 2004 and 2005, Reid's office said.

"In light of questions that have been raised about the practice, Senator Reid will not accept these kinds of credentials in the future in order to avoid even the faintest appearance of impropriety," spokesman Jim Manley said.

AP reported Monday that Reid accepted the free seats to three fights from the Nevada Athletic Commission as it was trying to influence his support for legislation to create a federal boxing commission. The state agency feared the legislation would usurp its authority to regulate fights and wanted to convince Reid there was no need for a federal body. Reid continued to support the federal body.

Reid told Las Vegas reporters on Tuesday he would continue to accept such tickets and did not believe he did anything wrong even though a fellow senator, John McCain, R-Ariz., who joined him for one of the fights, decided to reimburse $1,400 for his seat.

Reid said he believed it was appropriate to accept the free tickets because the gifts were from his home state and that McCain had to reimburse because he was from out of state.

Senate ethics rules generally allow senators to take gifts from any state, not just their home state. But they specifically warn against taking normally permissible gifts if the giver may be trying to influence official action.

Manley said Wednesday night that Reid "misspoke when he said the rule applies only to senators who represent the state agency." But he added he believes Reid still could ethically accept the tickets.

"It was therefore entirely permissible for Senator Reid — a senator from Nevada — to have attended a major Nevada sporting event as a guest of Nevada officials," Manley said.

Several ethics experts disagreed, criticizing Reid's justification during his Las Vegas news conference that he felt an "obligation" to take the tickets to ensure boxing was being conducted properly in his home state.

"He is no more obligated to go to boxing matches than he is to a Celine Dion concert in Vegas," said Melanie Sloan, a former Justice Department prosecutor and head of Citizens for Responsibility and Ethics in Washington.

"The test under congressional ethics rules in these circumstances is not what state a member is from but whether the gift creates the appearance that the gift is motivated by a desire to influence the member or gain favorable official action," said Wertheimer, president of the nonpartisan Democracy 21 ground that advocates campaign finance, ethics and lobbying reforms. "If the gift creates such an appearance, it should not be accepted."

Reid told AP the free tickets did not influence his position, noting he voted for the legislation when it passed the Senate. However, Reid had forced a change in the bill that let the federal commission regulate the TV networks when they promoted fights. After the change, the House never approved the legislation.

Boxing promoter Bob Arum said when Reid did go to boxing matches in earlier years he always paid for tickets.

Ethics experts said the fact that Reid paid for past tickets, then accepted free seats from the commission after he became a Senate leader and was pushing legislation affecting the sport only worsened his ethical picture.

"Any time a politician starts parsing language and telling different stories, you have to assume they may have something to be ashamed of," Miller said.