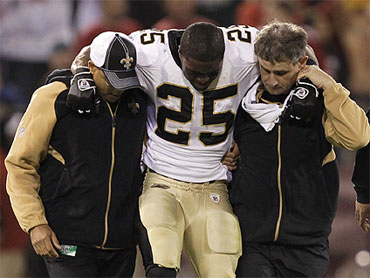 
According to published reports, Saints running back Reggie Bush suffered a broken leg during Monday's win against the 49ers and he's expected to be out about six weeks.

Neworleans.com's Brian Allee-Walsh sets a good postgame locker room scene and originally reported Bush had broken his leg and that he'd be out a minimum of six weeks.

Bush is supposed to undergo more tests today, but it doesn't appear that his ankle or his knee have been affected.

Sources told ESPN.com's Adam Schefter that the injury was a broken fibula but was not expected to be a season-ender. Instead, Bush could be back as early as four weeks.

The injury occurred in the fourth quarter while Bush was trying to field a punt in windy Candlestick Park - a punt he muffed - and while attempting to recover the ball, somebody landed on his leg.

"It was pretty windy and the ball was moving around a little bit,'' Bush said after the game. "At the last second, it kind of shifted just enough for me to drop it and I tried to recover it and somebody took my leg off.

"I don't know who it was, what happened, or how it happened. I just know my leg got taken out. That's it.

"It hurt like hell," Bush said. "When I got back up and tried to walk on it, it felt terrible. I'm trying not to think the worst and trying to stay as positive as I can in this situation. That's all I can do is hope for the best."

Without him, the Saints will lean heavily on running back Pierre Thomas but considering Bush brings so much to New Orleans' offense - rushing the ball, catching the ball out of the backfield and on special teams - the Saints will have a tough time duplicating his abilities.