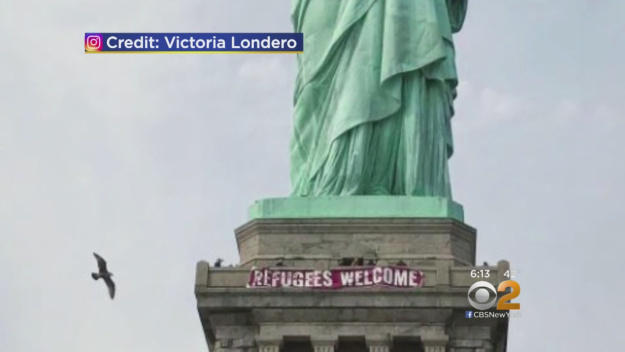 NEW YORK --The National Park Service is trying to figure out who unfurled a giant banner at the Statue of Liberty saying “Refugees Welcome.”

Park Service spokesman Jerry Willis says the 3-by-20-foot banner was hung from the public observation deck at the top of the statue’s pedestal Tuesday afternoon.

Park rangers determined it could be removed without damaging the statute and began the process of taking it down, CBS New York reports. The banner was taken down more than an hour later.

“Affixing a banner to the national monument is strictly prohibited, and an investigation is underway by the United States Park Police to identify suspects,” the agency said in a statement.

It’s not illegal to bring a banner onto Liberty Island, but it is against the law to hang anything from the monument.