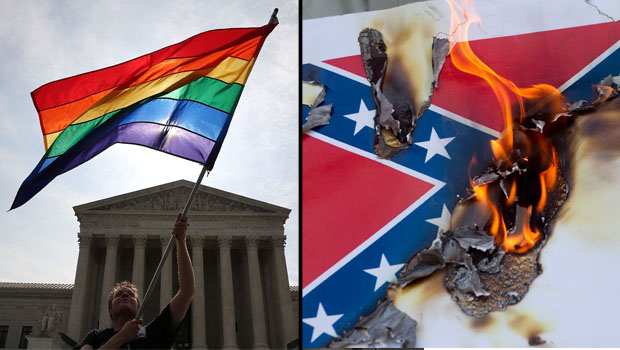 The first American idea, that "all men are created equal," has never been honored. It was aspiration, more than declaration. And so the struggle for progress has been the inheritance of every American since.

Pressure for equality builds. And once in a great while, like a tectonic fault, there's a sudden lurch forward. That's the quake we felt this week.

Monday, South Carolina moved to strike the Confederate battle flag. Overnight, there was a national rush to obliterate relics of oppression. Shopkeepers and state houses couldn't remove them fast enough -- as if they had been noticed for the first time.

Friday, the tremor moved the stone at the court -- shifting the words carved there - nearer to the truth. Millions of Americans, for the first time in our history, achieved their "equal justice under law."

The African-American poet, Langston Hughes, wrote: "Let America be America again...It never was America to me."

The truths, "self-evident" at our founding, are not self-fulfilling. We the people, are founding today the America that was promised.

U.S. says same-sex partners of U.N. staff will have to marry or leave
More
Scott Pelley