Peter Maer is a White House correspondent for CBS News. 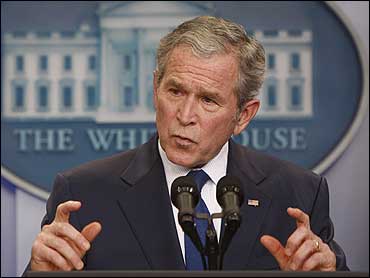 It was a defiant, wistful and sometimes unusually introspective performance.

Mr. Bush elaborated on his intention to let history be the final judge of his White House years. He told reporters, "I've had my time in the klieg lights." But as he heads into his last full week in office, the president clearly hopes to control the focus of those lights on his legacy.

Reflecting on the sour economy, Mr. Bush said, "I readily concede I chucked aside some of my free-market principles when I was told by chief economic advisers that the situation we were facing could be worse than the Great Depression."

He said, "I inherited a recession. I'm ending on a recession." But Mr. Bush also inherited a balanced budget. There was no mention of the massive budget deficits that have piled up over the past eight years as he defended the tax cuts that some critics blame for much of the red ink. Mr. Bush insisted the cuts were "the right course of action." In something of an understatement, he said his successor "would have his hands full with the economy."

He was surprisingly frank about lingering regrets. He mentioned the famous "Mission Accomplished" banner posted as he appeared on the aircraft carrier Abraham Lincoln long before major military operations ended in Iraq. He now admits that it "sent the wrong message." Referring to the hideous scenes of detainee abuse at a U.S.-run prison in Iraq, he said, "Abu Ghraib was a huge disappointment." He described the failure to find weapons of mass destruction that his administration used to justify the war as "a significant disappointment." He stopped short of calling it a mistake, telling reporters, "Things didn't go according to plan."

Without mentioning any examples, he said some of his rhetoric was a mistake. Mr. Bush offered a new fascinating insight into his domestic decision-making. He said he has thought "thought long and hard" about his initial response to Hurricane Katrina. He rhetorically asked, "Could I have done something differently like land Air Force One either in New Orleans or Baton Rouge?" He quickly answered his own question, saying critics would have accused him depleting local resources by flying into a disaster zone. He later added, "Don't tell me the federal response was slow when there was 30,000 people pulled off roofs" not long after the hurricane passed over the Gulf Coast.

Responding to a reporter's question about the observation that the presidency has been called "the loneliest job in the world," Mr. Bush insisted the phrase "burdens of the office is overstated." Feigning emotion he asked, "Why me, the burdens? Why did the financial collapse have to happen on my watch? Its just pathetic; the self pity." In a curious choice of words Mr. Bush recalled, "Even in the darkest moments of Iraq, you know, there was - and every day, when I was reading the reports about soldiers losing their lives, no question there was a lot of emotion, but also there was times where we could be lighthearted and support each other."

Mr. Bush predicted his successor would not be lonely or isolated. He noted that Barack Obama will be just "a 45-second commute away from a great wife and two little girls who love him dearly."

The president indicated he won't be riding off into the sunset when he returns to Texas next week. He said he couldn't envision himself in a straw hat sitting on a beach, adding with a chuckle, "particularly since I quit drinking." He told his audience "you'll catch me opining on occasion."