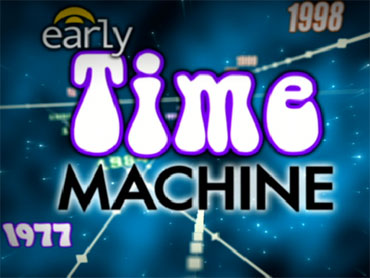 In "The Early Show"'s "Time Machine" series, the anchors took a look back at the events and pop culture that defined the year 1979 for them, and for the world.

"Early Show" news anchor Russ Mitchell remarked that he was in earning his degree in 1979. "I was a sophomore in college," he said. "When I look back on 1979, I always smile."

To "Early Show" co-anchor Maggie Rodriguez, 1979 was about music. She joked, "I remember thinking that I knew how to speak French because I could say, 'Le freak, c'est chic. Freak out.' It was great."

"Early Show" weather anchor and features reporter Dave Price added The Bee Gees were also big that year. Price said they were a big part of the Price household because his brother, Howard, had all of their albums.

Change in the Middle East, Price said, also shaded that year, the Shah fled Iran with his family for Egypt, "opening the door for Ayatollah Khomeini to come back in."

Mitchell said, "I remember watching television and seeing this incredible moment in history, and seeing the smiles on Menachem Begin's face, Anwar Sadat's face and Jimmy Carter's face and thinking, 'Wow, we're looking at a lasting peace in the Middle East. Little did we know."

Alarm resounded in the U.S. in March that year when a massive meltdown occurred at Pennsylvania's Three-Mile Island nuclear plant. Rodriguez noted that the movie "The China Syndrome," about a nuclear reactor accident, was also released that year.

"Early Show" co-anchor Harry Smith said, in the U.S., nuclear power has been a "boogey man" ever since the incident.

On the highways in 1979, Mitchell said, Americans were thinking smaller.

"Many Americans had these huge, big gas guzzlers, as we've come to know them now. But in '79, Americans-- I guess, got smart," he said. "These little, bitty cars from around the world really started filling up our streets."

In 1979, however, there was still a lot of prejudice, Smith pointed out.

"One of the prejudices that were still thought to be OK to hang onto was bias toward gays and lesbians," he said.

Rodriguez recalled that the television show "Charlie's Angels" was a hot show that year. She said, "I always wanted to be Kelly, Jaclyn Smith's character, because she had the long, dark hair like I did."

That year was also marked by the hostage situation at the U.S. Embassy in Iran. Smith remarked that the event seemed almost impossible. Referring the feeling in the U.S. at the time, he said, "We're America, and our embassy doesn't get overrun. And our people don't get taken hostage."

Rodriguez said, "I remember that everyone at that time wore yellow ribbons in honor of those hostages."

Mitchell added, "And every night they would say, 'It's Day Five, Day Six, Day Seven, etc., etc., of the hostage situation in Iran.'"

"What started out as a hostage crisis," Price said, "became the defining failure of the Carter administration."