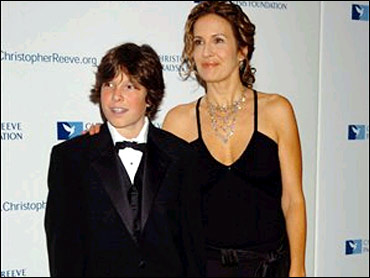 Gone but hardly forgotten, the late Christopher Reeve was remembered Thursday for his courage and commitment at a $2 million fund-raising dinner that continued his efforts to find a cure for spinal-cord injury victims.

"Christopher pushed the boundaries beyond anything anyone could expect from any human being," said his widow, Dana Reeve, who succeeded him as chair of the Christopher Reeve Paralysis Association. "A human being - not Superman, alas, but a human being."

A star-studded crowd that included William H. Macy, Paul Simon, Minnie Driver and others turned out at what became yet another tribute to Reeve's indomitable spirit in the wake of his death last month at age 52.

"Our hero has passed on and now we need to be the heroes," Dana Reeve said. "Your heroic gesture, frankly, is to write a check."

"Christopher became a great man, someone the whole world mourns," Close told 900 guests at the New York Marriott Marquis. "He is irreplaceable, and he is here urging us on."

Among the guests were model Carol Alt and actor Giancarlo Esposito, who offered their reminiscences of Reeve.

"I grew up with the `Superman' movies," Alt said. "I remember him at his home barbecuing."

Esposito recalled how his friend had accomplished so much without the use of his body.

"He was a profound leader," Esposito said. "We were all surprised and crushed at his demise. Those of us who know Chris, we're sure he's walking in heaven."

Actor Daryl Mitchell, paralyzed in a 2001 motorcycle accident, arrived in a wheelchair and cited Reeve as an inspiration.

"I had nobody to stand up for me, but Christopher did," he said.

Dana Reeve said this week that while the gala had naturally evolved into something of a tribute to him, it's important "that we're also thinking about the future and about fund raising and about keeping his mission alive."

Reeve became the public face of spinal cord injury after a May 1995 horse riding accident left his unable to use his arms or legs or breathe without a ventilator. He used his celebrity to lobby for more funds for biomedical research and aid to the disabled.

His foundation, which merged in 1999 with the American Paralysis Association, has awarded $53.6 million in grants.