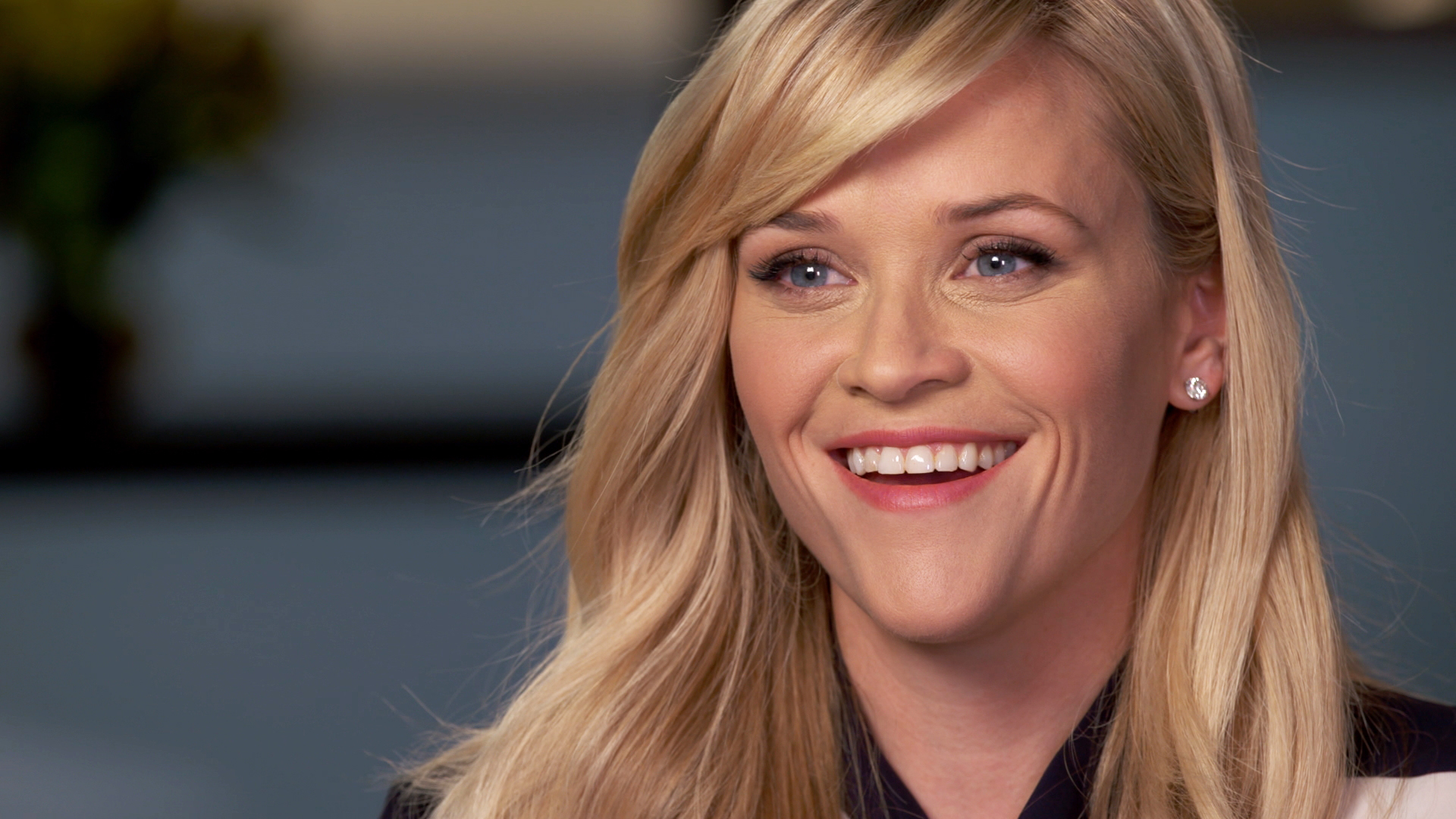 The following is a script from "Reese Witherspoon" which aired on Dec. 21, 2014. Charlie Rose is the correspondent. Ruth Streeter, producer.

Laura Jeanne Reese Witherspoon started making movies when she was 14. Ten years later she broke into the elite group of "highest- paid" actresses in Hollywood and, at 29, she won an Oscar for best actress. But her career floundered when she couldn't get the roles she wanted and so she did something unusual. She started making the movies herself. And it has paid off handsomely.

Today, at 38, she's successfully produced two of the most talked about movies of the year: "Gone Girl" and "Wild." She also stars in "Wild." Both are about flawed, dynamic women and both are getting Oscar attention.

Reese Witherspoon: I'll take all four of those. Those are all good.

Reese Witherspoon: That's the one that confuses me. 'Cause I feel like I've done such a range of different roles. Some are sweet, for sure, but all of them have a ferocity of spirit.

Spirit is what her character, Elle Woods, had in "Legally Blonde."

Witherspoon played a perky Harvard law student who became an unlikely modern feminist and the film became an international box office hit. Four years later, in "Walk the Line," she portrayed June Carter Cash and won every major award, including the Oscar.

Yet despite that, she was offered roles as wife, girlfriend and sidekick. All of which frustrated her.

Charlie Rose: Is the image of you changing?

Reese Witherspoon: Yeah. And I'm ready for a change. I'm definitely ready. I remember a few years ago, I was asked to do an interview for 60 Minutes. I was too scared.

Charlie Rose: You said no.

Reese Witherspoon: I didn't know what to say. And, now, when I was approached, I was just-- I felt like, "No, yeah. This makes sense. I have something to say now."

"...I'm ready for a change. I'm definitely ready. I remember a few years ago, I was asked to do an interview for 60 Minutes. I was too scared."

She says it through her new film, "Wild."

She plays a broken woman seeking to reclaim her life by hiking a punishing 1,100 miles alone on the Pacific Crest Trail.

It is based on the brutally honest, best-selling memoir by Cheryl Strayed.

["Wild": I wouldn't do a single thing differently. What if all those things I did were the things that got me here?]

Reese Witherspoon: That is about grief and loss and self-harm and how we have to choose to save ourselves.

In the movie, she shows how Cheryl reacted to her beloved mother's early death. She became self-destructive, destroyed her marriage, took drugs and had random sex with anonymous men.

Reese Witherspoon: I don't think I've ever in my life had to do scenes that were so-- exposing. And--raw.

Charlie Rose: So what are you calling on in yourself to make those scenes so real?

Reese Witherspoon: Well I mean a lot of my own personal life experience. I mean, I've certainly had relationships that didn't work out that were devastating, you know?

Reese surprised us when she revealed that her mother, like her character in the movie, had lost her mother when she was very young. And Reese relived her mother's grief in preparing for the role.

Charlie Rose: There's a scene at the end of the movie where you're-- Cheryl falls to her knees and she says, "I miss you, God. I miss you."

Reese Witherspoon: That's probably my mother. My mother's mother died when she was 20. I didn't understand as a little girl why she was crying. And she would say, "I miss my mom." And I held her grief in my body. I didn't even realize I held her grief for her for so long. Then when my mom saw the film, she said to me, "I know that you saw me. 'Cause that's my story." And she's a beautiful, amazing woman. She's definitely become the woman that her mother wanted her to be. And I'm named after my grandmother. I hope I make movies that make them laugh and I hope I make movies that make them feel proud of how strong they are.

Charlie Rose: There's a tradition of strong women in the South.

Reese Witherspoon: Oh sure. There's strong women everywhere, Charlie. I go all over the world--

Charlie Rose: It's-- absolutely. It's all over the world--

Reese grew up in Nashville. Her father was a doctor, her mother a nurse. No one encouraged her to be an actor. They wanted her to go into medicine.

Charlie Rose: You study over there.

In order to be close to her mother, she is renovating a new home in Nashville.

Reese Witherspoon: It's great, isn't it?

Reese Witherspoon: You have to have vision, Charlie.

Charlie Rose: It's perfect for you.

Charlie Rose: There she is.

Reese Witherspoon: This is my mom, Charlie.

And while she was showing it to us, her mother stopped by.

Charlie Rose: When you saw the movie, what did you see?

Betty Witherspoon: It was my story.

Charlie Rose: It was your story?

Charlie Rose: This is?

Her baby started taking acting lessons at seven. At 14, Reese went to an open audition downtown for a major motion picture. She stunned everyone when she won the starring role in "Man in the Moon."

She played an innocent but feisty tomboy who falls in love for the first time.

Reese Witherspoon: I just loved making movies. I was just-- and my mother had to stand in front of me and say, "You are going to high school. You are not going to do this movie thing. You know, you're going to have a real job."

Instead of going to Hollywood her parents insisted she go to Harpeth Hall, a prep school nearby. She was an excellent student who loved reading. And she told us... the school left an indelible impression.

Charlie Rose: Tell me about Harpeth.

Reese Witherspoon: Well, it's an all-girls school, which I-- I really enjoyed.

Reese Witherspoon: It was just a place that you did not-- you weren't distracted by boys, and I was boy crazy. I was boy crazy when I was a teenager.

Charlie Rose: Even then?

Reese Witherspoon: Even then, Charlie. No, but-- that and it just-- it had a great focus on, you know, feminism and that we could accomplish anything we wanted to.

What she really wanted, was to be an actress.

Charlie Rose: This is the phone where you called your boyfriends--

Reese Witherspoon: Where I used to call my boyfriends.

It was also how she communicated with her agent. Throughout high school she made movies in the summer.

Reese Witherspoon: I also used to call my agent on this phone.

Charlie Rose: So you went from boyfriend to agent?

Reese Witherspoon: Well, if-- if he sent me a script, I'd have to call him during L.A. time, so I'd come down here and I'd be like, "Tell Mr. Wert that I'll be back in class in just a second," and I would be like, "I read this script and I'm not gonna do it. Okay, thanks, bye."

She did well enough at Harpeth Hall to be accepted by Stanford but dropped out after a year and moved to Hollywood. There she successfully made the transition from child actor to movie star. And, by age 23, she was married to actor Ryan Phillippe and had started a family. At 29, she had a series of box offices hits and an Oscar. Reese Witherspoon was at the peak of her career.

Reese Witherspoon: That was a tough year that followed.

Reese Witherspoon: I got divorced the next year and I spent, you know, a few years just trying' to feel better. You know, you can't really be very creative when you feel like your brain is scrambled eggs.

Charlie Rose: Feel like you failed in your personal life?

Reese Witherspoon: Yeah, and then I was just kind of floundering career-wise, 'cause I wasn't making things I was passionate about. I was just kind of working, you know. And it was really clear that audiences weren't responding to anything I was putting out there.

Charlie Rose: And there was a list of people who were no longer box-office magic.

Reese Witherspoon: Yeah. I was one of 'em. I thought I was reading, like, a profile on another actor. Then somewhere down-- at the end, it said, you know, 'The people who are washed-up,' and I think it included me, Tom Hanks, Mel Gibson. And I remember just being like, "OK." I-- that just-- I mean, it really hurt my feelings. Really hurt my feelings.

Charlie Rose: And your self-esteem.

Reese Witherspoon: And my self-esteem. And made me feel like I contributed nothing. And that you're only as good as your last movie. Which is a pretty crummy feeling for an actor. But it's also a great motivator.

Three years ago, Witherspoon decided to make her own movies. She and seasoned producer, Bruna Papandrea, put up the money to start a production company. Called Pacific Standard, it focuses on projects that feature interesting, complicated women in leading roles.

Charlie Rose: But yours is a lean and mean company. I mean, you guys figure out a way that you can get it done by total involvement yourself.

Reese Witherspoon: Yeah, we make all the phone calls. We-- she does all the budgets. She looks at the budgets, goes over everything.

Bruna Papandrea: We are ultimately the two decision makers.

Their first two decisions have been right on the money. "Gone Girl" has brought in nearly $350 million at the box office so far. "Wild," which opens nationwide this week, has gotten strong reviews. Both movies are based on books they optioned before publication.

Reese Witherspoon: I think right when "Gone Girl" and "Wild" were both number one on the New York Times best seller list at the same time. I think that's when people started going, "Whoa."

Reese Witherspoon: "What are they-- (laugh) how did they get--" and people started calling us and like, "Wait, how did do you guys get that book?"

Charlie Rose: You know it says Hollywood is a boy's club in part. That more of these films aren't being made. Yes?

Charlie Rose: Is it cracking?

Bruna Papandrea: Yes, may be a little bit, yeah. The thing that really needs to change is this idea that "Wild," for instance, a movie about a woman who goes on a hike is not just a movie for women. You know, they would not put that label on it if it was a man who was taking that hike. They would assume that women would want to go see that movie as well. But they do put the label on it. And I think that's really the big thing that we're trying to break down.

Their fledgling production company is off to a good start. It has 16 television and movie projects in development.

"The thing that really needs to change is this idea that 'Wild,' for instance, a movie about a woman who goes on a hike is not just a movie for women. You know, they would not put that label on it if it was a man who was taking that hike."

Charlie Rose: And at long last, you feel in control.

Reese Witherspoon: Yeah. Yeah. Definitely. And I feel like my perspective matters, for the first time.

Charlie Rose: And if you succeed, that it will change Hollywood.