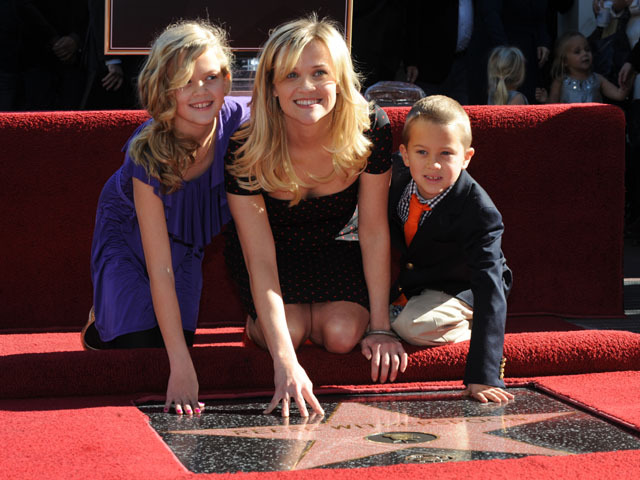 LOS ANGELES (CBS/AP) Oscar-winner Reese Witherspoon has been honored with a star on Hollywood's celebrity Walk of Fame.

The "Legally Blonde" and "Walk the Line" actress unveiled her star on Wednesday outside the W Hollywood Hotel. It's the 2,425th star dedicated on the celebrated avenue of dreams.

The ceremony was designed to coincide with the Dec. 17 release of her latest movie, "How Do You Know," co-starring Paul Rudd and Owen Wilson and written and directed by James L. Brooks, who introduced the actresses to the crowd.

The 34-year-old's two children with ex-husband Ryan Philippe, daughter Ava, 11, and son Deacon, 7, joined Witherspoon for the unveiling, while her parents and boyfriend, agent Jim Toth, were seen in the audience, the Los Angles Times reports.

In 2006, she won the best-actress Academy Award for her portrayal of June Carter Cash in "Walk the Line."

Her film credits also include "Cruel Intentions," "Pleasantville," "Sweet Home Alabama" and "Just Like Heaven," but she is perhaps best known for playing Elle Woods in the "Legally Blonde" movies.