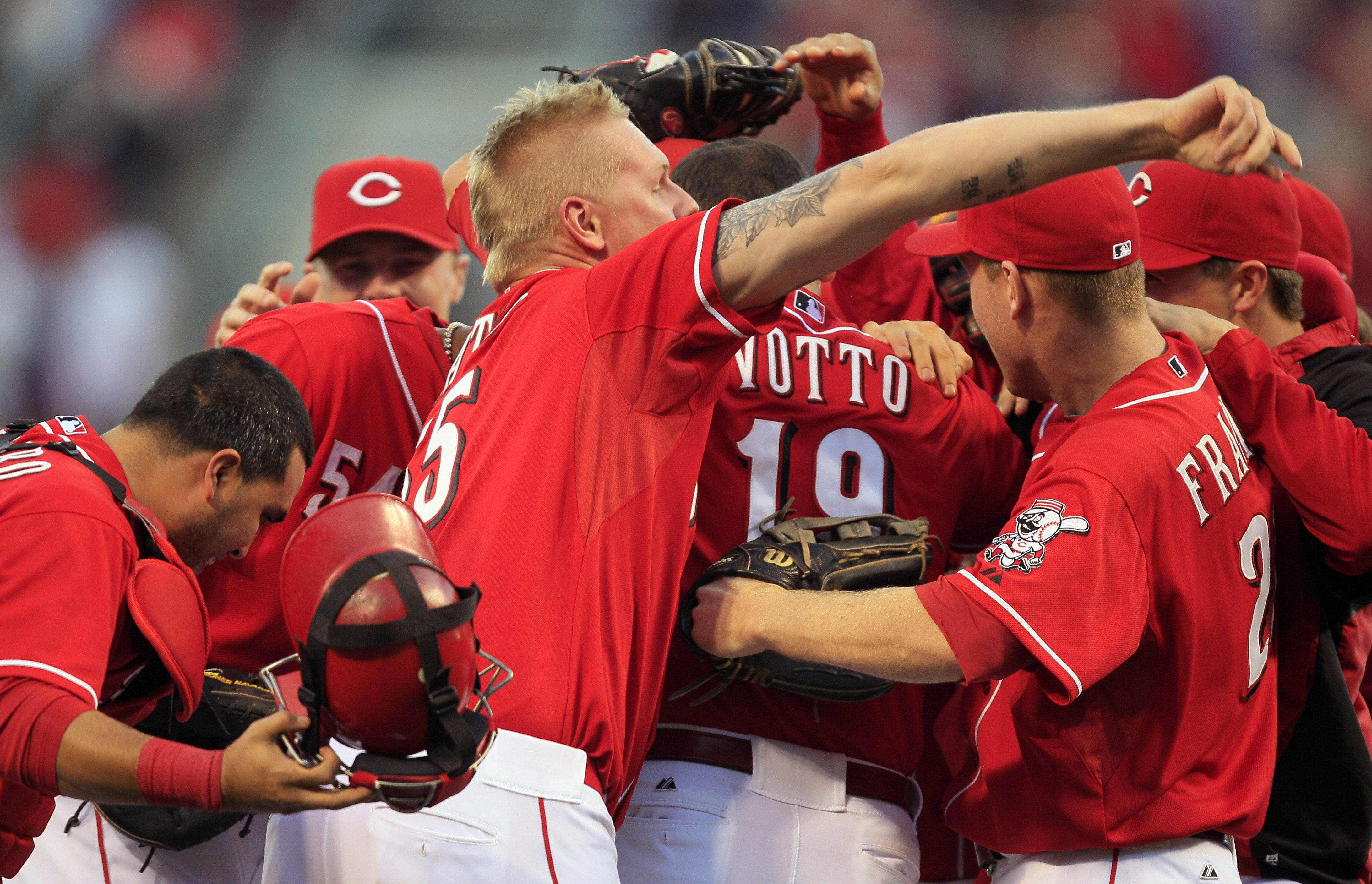 (AP) CINCINNATI - The Reds' Mr. Clinch got their championship party started on the second try.

Jay Bruce's 34th homer put the Reds ahead to stay, and they made good on their second chance to win the NL Central title by beating the Los Angeles Dodgers 6-0 on Saturday without Dusty Baker.

The 63-year-old manager spent another day in a Chicago hospital getting treated for an irregular heartbeat. The Reds brought him his fifth division title as a manager, including two during the last three years with Cincinnati.

Bruce's first-pitch, leadoff homer in the ninth off Houston's Tim Byrdak clinched the title for Cincinnati in 2010. On Saturday, he led off the fourth inning with a first-pitch homer off rookie Stephen Fife (0-2), and Cincinnati's main offseason pitching acquisition made it stand up.

Mat Latos (13-4) allowed six hits and didn't walk a batter in eight innings. Left-hander Aroldis Chapman made his first appearance since Sept. 10 — a tired shoulder sidelined him — and finished it off by getting Hanley Ramirez to hit into a double play off a 99 mph fastball.

The celebration was on.

Players formed a huddle to the side of the mound, with pitcher Johnny Cueto spraying them with a bottle of water. An attendant rolled out a cart of gray championship shirts and hats.

They had felt it coming.

As the Reds pulled away, second baseman Brandon Phillips pretended he was shaking a bottle of champagne and spraying it everywhere while sitting on the bench in the dugout. Phillips says the only other time he's had champagne was during the 2010 clubhouse celebration.

Cincinnati became the first team in the majors to clinch a division title this season, leaving it with one goal left. The Reds are vying with Washington for the NL's top seed in the playoffs, both with 92 wins that lead the majors.

It's unclear when Baker will be back. The three-time manager of the year also won division titles with the Giants and Cubs. Baker reached the World Series once as a manager, losing a Game 7 against the Angels in 2002, his final season in San Francisco.

The Reds had their first opportunity to take the title on Friday night, but lost 3-1 to the Dodgers in 10 innings. Bruce had a chance to win it with another game-ending homer, but struck out leading off the ninth.

The Dodgers lost for the 11th time in 16 games, a swoon that has dropped them out of a wild-card spot. They trail St. Louis by three games and Milwaukee by a half-game for the final playoff berth.

Cincinnati's 92nd win is another high point under Baker, who took over in 2008 when the club was rebuilding with young stars Bruce, Joey Votto and Cueto. The Reds improved each of the first two seasons, then became champions ahead of schedule by winning 91 games in 2010 to secure their first postseason appearance in 15 years.

Their inexperience showed in the playoffs, where the Reds got no-hit by Roy Halladay and swept by the Phillies in three games. Votto won the National League's MVP award.

Things unraveled last year, when the front office decided to bring the team back virtually intact rather than upgrading its problem areas. Three of the five starting pitchers got hurt or sick during spring training, and several veterans had disappointing seasons, resulting in a third-place finish.

Cincinnati learned from its mistakes. The Reds traded two former first-round picks and starter Edinson Volquez to San Diego for Latos. Then they gave Votto an extra 10 years and $225 million on his contract.

Baker did some of his best managing during the season. The back end of the bullpen — closer Ryan Madson, set-up relievers Nick Masset and Bill Bray — got wiped out by injuries during spring training. Baker eased Chapman into the unfamiliar closer's role, and he set a club record with 27 consecutive saves.

Votto was the only consistent hitter going into July. He tore cartilage in his right knee and needed two operations. Baker was forced to juggle his lineup and batting order, trying to figure a way to make up for Votto's productivity and stay in the race for the next six weeks.

It worked beautifully. The Reds went 32-16 without Votto, pulling into a commanding lead in the NL Central. They were closing in on clinching the division when they went to Chicago this week, then had another setback. Baker felt bad on Wednesday and was taken to a Chicago hospital for treatment of his irregular heartbeat.

He was in their thoughts when they finally won the title.

"I guess we've got to go out there and win one for the skipper," rookie shortstop Zack Cozart said as the series started.

NOTES: Los Angeles hasn't decided whether to start LHP Clayton Kershaw on Sunday or RHP Aaron Harang on short rest. Kershaw hasn't pitched in a game since Sept. 11 because of a sore hip. He threw 20 pitches in the bullpen on Friday without problem. ... Dodgers C A.J. Ellis grounded out twice, extending his slump to 0 for 28. ... Reds interim manager Chris Speier didn't want to use Chapman in a save situation his first time back, thinking it would be too much pressure. He had Jonathan Broxton warming up when it was a 3-0 game.