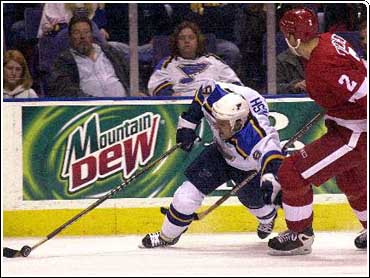 Chris Osgood faced only 13 shots as the Red Wings won the second half of a home-and-home series with St. Louis, ending the Blues' six-game winning streak with a 2-0 victory Thursday night.

"Guys have pride," Osgood said. "St. Louis beat us pretty bad at home, and we decided enough was enough."

Martin Lapointe and Nicklas Lidstrom scored for the Red Wings, who ended a three-game losing streak and narrowed the Blues' lead in the Western Conference to three points. Osgood said it was the Red Wings' best game of the year and teammates weren't arguing.

"That's the way we were playing when we were winning our Cups," said Brendan Shanahan, who set up the first goal.

The Blues ended an eight-game winless slump (0-6-2) at Detroit on Tuesday with a 4-1 victory, but seldom got the puck out of the neutral zone in the rematch.

"We're not happy with a split, but that's what we have and we'll move on," Blues coach Joel Quenneville said.

The Blues, second in the NHL with 74 points, were shut out for only the second time this season and their shot count was their lowest. The other shutout was Nov. 3 at Colorado, and their previous shot low was 16 in a 3-2 victory at Los Angeles on Jan. 13.

"They did the same thing to us that we did in their building," defenseman Chris Pronger said. "They controlled the play and forced is to try and do things that are unchaacteristic of our team."

Osgood has three shutouts this season and 26 for his career, although this was the first since Oct. 23. He is tied with Harry Lumley for second place on the Red Wings' career list.

The Red Wings had allowed 15 goals on 84 shots, including 30 to the Blues on Tuesday, in the three losses.

"We weren't the same Red Wings team and we were losing some respect," Osgood said. "Teams were pretty much doing what they wanted with us, and we got back to the way we were playing."

Detroit entered the game with an eight-game winless slump (0-6-2) at St. Louis, but silenced a sellout crowd of 20,349 early with smothering defense.

The Blues didn't get a shot until Bob Bassen's weak effort from near center ice at about the seven-minute mark and had no sustained pressure until around the 13-minute mark of the second period.

"We didn't expect them to come in here and just lay down and give us the second game," Blues center Craig Conroy said. "We have to go back to the drawing board to try to solve Detroit."

Shanahan fended off defenseman Ricard Persson and made a back-hand centering pass that Lapointe knocked in from mid-air for his 11th goal at 15:05 of the first.

Blues goalie Roman Turek gave up a big rebound on a shot by Steve Yzerman, and Lidstrom connected with a slap shot on the power play at 9:57 of the second. Lidstrom, who has 14 goals and 50 points, entered the game second in the NHL in defenseman scoring.

Blues defenseman Al MacInnis missed the final period with back spasms. MacInnis played 19 minutes through the first two periods and Quenneville said he was held out as a precaution.