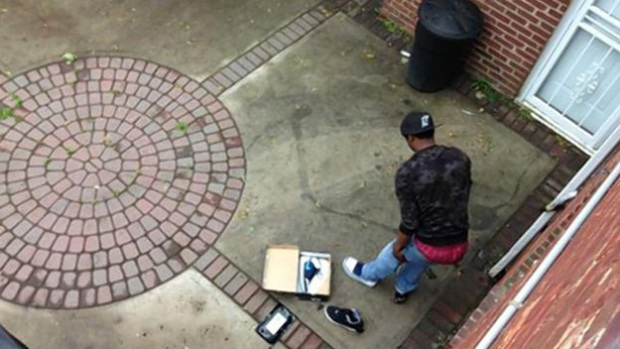 HEMPSTEAD, N.Y. - Blue sneakers were the subject of the crime, but police say it was a man's red underwear that led to his arrest on Long Island.

Police say 18-year-old Taykim Ross stole $200, electronics and Air Jordan sneakers from an apartment in Hempstead Monday and stopped in the backyard to try on the new kicks. That's when a neighbor snapped a photo of the suspect with red boxers visible above his jeans.

Village Police Officer Russell Harris says he was returning after a canvass of the neighborhood when he noticed someone taking garbage out. He saw someone bending over with "bright red underwear."

Turns out, it was an exact match.

"I just happened to sit in the car for a moment and in my rear view mirror about 500 hundred yards away I see a guy bending over putting garbage bags down and what do I see, low and behold, I see red underwear standing out," Harris said.

The officer acknowledged that young men in Hempstead are often seen not wearing belts with pants hanging low.

Harris was arraigned on a burglary charge Tuesday in district court and was conditionally released to probation.