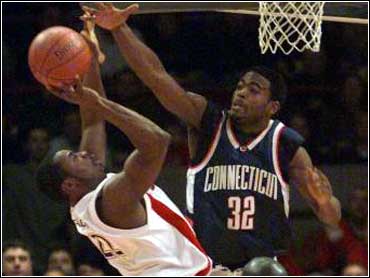 When one backcourt dominates another like St. John's starting guards did to Connecticut's on Monday night, it usually happens in one of those early season non-conference mismatches.

Erick Barkley and Bootsy Thornton outscored Khalid El-Amin and Albert Mouring 42-2 and the Red Storm rolled to their sixth straight victory, 79-64 over the 22nd-ranked Huskies.

The cloud of a second NCAA investigation in a month didn't appear to be affecting the Red Storm (19-6, 11-3 Big East) on the court as they beat a ranked conference opponent for the second straight game.

Saturday night's 76-75 victory over then-No. 9 Syracuse was also in front of a sellout crowd of 19,410 at Madison Square Garden and started a tough closing stretch to the regular season.

"If the other night was special, and it was, we'll have to find other ways to describe this," St. John's coach Mike Jarvis said. "How about extra special? The kids were magnificent from the first play to the last play."

Barkley had 22 points on his 22nd birthday and Thornton had 20 and they each had four assists. El-Amin and Mouring, Connecticut's top two scorers, were a combined 0-for-16 from the field, including missing nine 3-point attempts.

Jarvis said trying to control the Huskies' backcourt was part of the game plan.

"You have to do that when you play outstanding shooters like them. Our guys did a good job of recognizing them," he said. "They didn't shoot tonight as well as they obviously can and have."

The loss was the fourth in sixth games for the Huskies (18-8, 7-6), who have lost more games this season than the last two combined, including last season's 34-2 run to the national championship.

"We stayed with them for a wile, then their backcourt outplayed our backcourt. My backcourt had an off night," Connecticut coach Jim Calhoun said. "We just didn't get a real good game from the perimeter. Our backcourt play has been deteriorating the last three, four weeks."

"We walked off the court on Saturday at midnight and yesterday we had some treatments, watched a little film and laughed a little," Jarvis said. "With a win you can do that."

The Red Storm led 39-33 at halftime, the same score as in the previous meeting between the teams at Connecticut, which St. John's won 82-77.

The Huskies, who haven't won consecutive games since a three-game winning streak from Jan. 27-Feb. 2, were within 47-40 on a rebound basket by Jake Voskuhl with 15:02 to play.

Reggie Jessie hit a jumper to start the Red Storm's 9-0 run that included a five-point play.

Voskuhl was called for a foul with 13:23 to play and was then given a technical foul for complaining about the call. Donald Emanuel made one free throw for the foul and Barkley made two for the technical. On the ensuing possession, Thornton followed his own shot to make it 54-40.

El-Amin missed a 3-pointer for UConn and Barkley went the length of the floor for a layup that made it 56-40 with 12:54 to play.

Calhoun then called three 30-second timeouts during the next 1:51 but the Red Storm took their biggest lead, 61-42, on a free throw by Postell with 9:44 left.

"Jake lost his cool and he shouldn't have but that wasn't what lost it," Calhoun said. "With a veteran backcourt, we should play better than this. This is a difficult time for us. We want to get back to the NCAA tournament and we have some work ahead of us. We've created this situation, no one else."

Kevin Freeman led the Huskies with a season-high 22 points and Voskuhl added 10.

El-Amin, the Huskies' leading scorer at 16.3 points per game, scored two points. He had a previous season low of four points against Fairfield. Mouring, second in scoring at 14.3, had six points twice, both in the opening five games of the season.

"The way things are going now we're not an NCAA team," El-Amin said in the locker room, holding his head in his hands. "We have to get our act together quick. I need a lot of work. I've been in a slump before. I'll work my way out of it."

The victory was the 300th for Mike Jarvis, who is 47-15 in his second season with St. John's. His overall mark, including stints at Boston University and George Washington, is 300-156.

"We've come together collectively as well as individuals with all this," Barkley aid, referring to the NCAA investigations, the first of which saw him miss two games for a rules violation involving trading cars with a family friend. The current investigation is continuing with no apparent time table. "Everybody is playing their role to perfection right now. If we can continue that, I think we'll go far in the tournament."

St. John's, which fell one game shy of the Final Four last season, closes the regular season with games at No. 2 Duke on Saturday, at home against Seton Hall and at Miami.