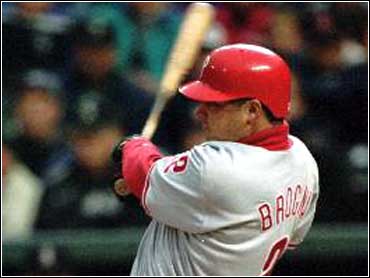 The best deal for the Boston Red Sox was the one they didn't make.

After failing to acquire Rico Brogna before the trading deadline, the Red Sox got the Phillies first baseman anyway on Thursday when they claimed him off waivers.

"We had discussions last week with Philadelphia, but we weren't able to close the deal. They wanted more talent than we were willing to give up," Boston general manager Dan Duquette said. "We took the risk that we would have an opportunity to acquire him by the waiver process."

Brogna was injured when he was hit by a pitch from Matt Blank on May 10 in Montreal, fracturing a bone in his left arm and keeping him out for more than two months. By the time he came back, he had lost his job to rookie sensation Pat Burrell.

The 30-year-old Brogna was batting .248 this year in 38 games with one home run and 13 RBIs. Since returning from the disabled list on July 21, he has appeared in eight games with three starts, the last one coming Wednesday night in San Diego.

"It's been a roller coaster of emotions this week," said Brogna, a Turner Falls, Mass., native who had made it clear he wanted to be traded. "Part of me is torn to be leaving, but the rest of me is excited to play."

Philadelphia could have pulled Brogna off waivers, but the Red Sox agreed to pay the rest of his 2000 salary, which is $4.2 million. He can become a free agent at the end of the season.

"We look forward to talking with him at a later date," Duquette said. "It's my understanding that having grown up in the area, he's interested in playing here, and that's good news for us."

Brogna has hit more than 20 homers and driven in over 100 runs in each of the last two seasons.

The Red Sox have needed a first baseman since Mike Stanley was released in the midst of a slump. Jose Offerman, who has played at first base this year because of defensive troubles at second, was placed on the 15-day disabled list on Tuesday.

Brian Daubach has seen most of the playing time at first base for Boston. He is hitting .266 with 15 homers and 58 RBIs.

To make room for Brogna on the 40-man roster, the Red Sox designated Sean Berry for assignment. They will have to clear space on the 25-man roster when Brogna joins the team on Friday.