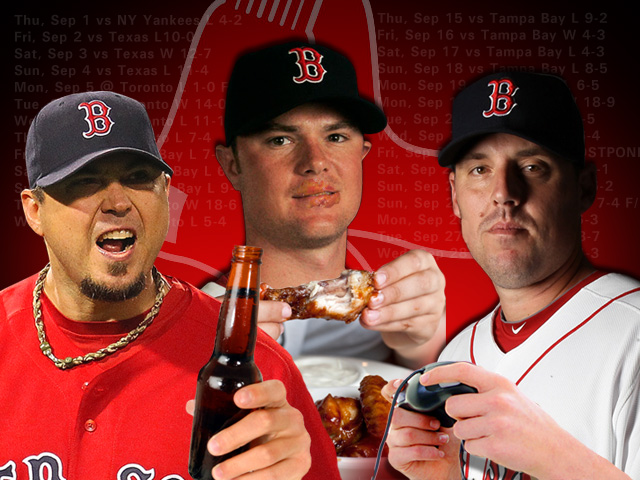 The epic collapse of the 2011 Boston Red Sox has been well chronicled (and today, as a result, their once-beloved general manager appears on his way out of town).

While the team had many scapegoats (namely high-priced free agent Carl Crawford and exiled manager Terry Francona), the Boston pitching staff was a collective Achilles heel - especially during the club's historic September swoon. Starter John Lackey summed up his performance early in the season thusly: "Everything in my life sucks right now."

But, according to a new Boston Globe report, the team's dysfunction and lack of effort was far more egregious than the casual fan would have guessed. The newspaper says that during the team's September slide, the team's top three starters - Josh Beckett, Jon Lester and John Lackey -settled into a routine of swilling brew, eating fast-food fried chicken, and playing video games in the clubhouse rather than support their struggling teammates in the dugout.

A few other notable nuggets from the Globe article:

"We play too many night games on getaway days and get into places at 4 in the morning,'' Gonzalez complained. "This has been my toughest season physically because of that.''

Tough, indeed. Enough to make someone want to unwind with beer, chicken and video games.

How parents can protect young athletes

What is the American Football Alliance