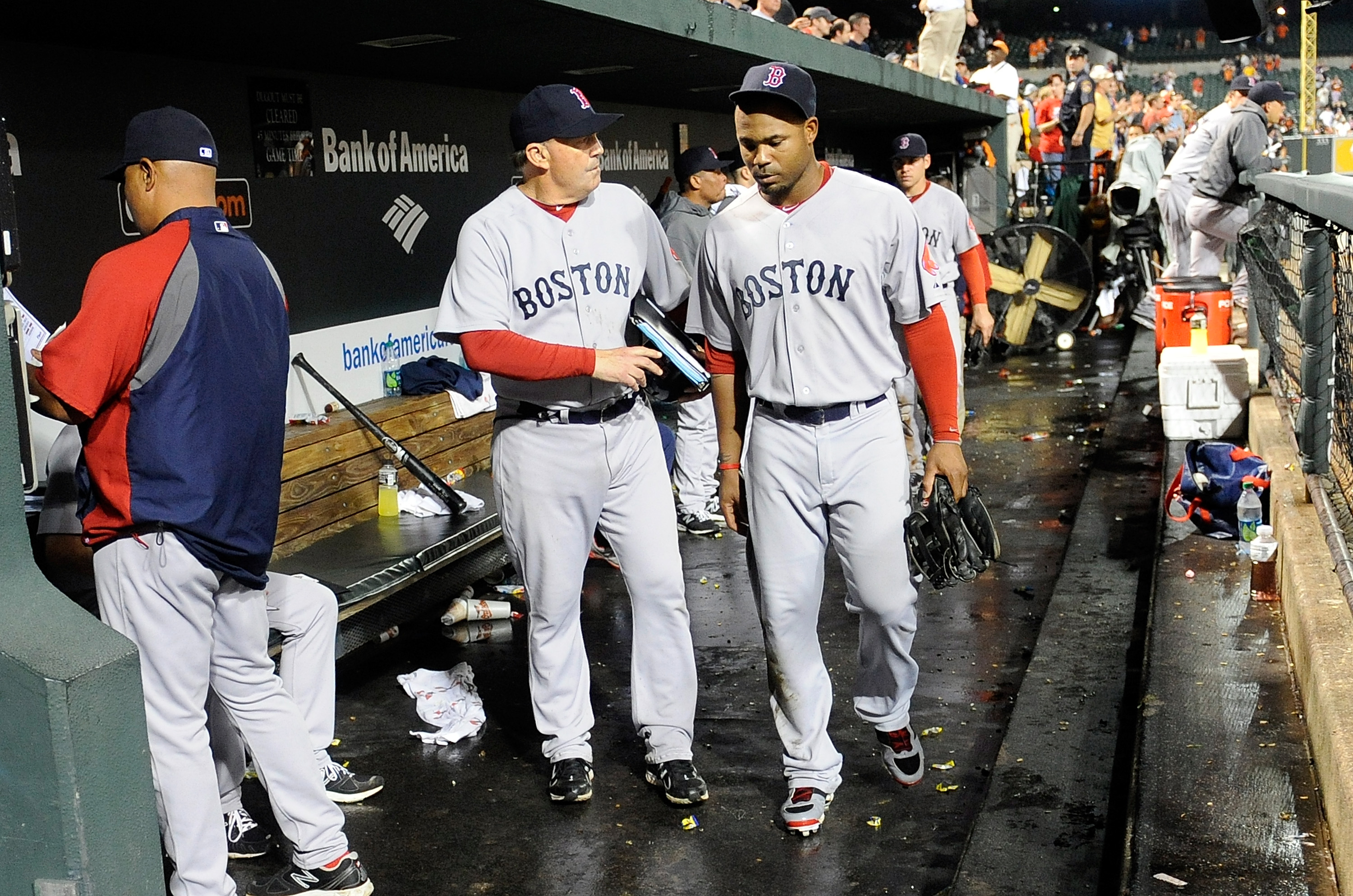 The star closer is the stunned symbol of the latest Red Sox collapse. This one lasted a month and finally ended when there were no more games left to lose.

"This is just maybe the worst situation that I ever have been involved in my whole career," designated hitter David Ortiz said. "It's going to stay in a lot of people's minds for a while."

No team has blown a bigger lead in September — a nine-game margin through Sept. 3 — and missed the playoffs. Boston went 6-18 after that and did not win consecutive games at any point in the month.

"This is one for the ages, isn't it?" general manager Theo Epstein said, a blank stare on his face.

CBSSports.com's Danny Knobler says this year's collapse is as bad as it gets, because there's not one moment and not one villain.

Boston began play Wednesday tied with Tampa Bay in the AL wild card race. But the Red Sox lost to the Baltimore Orioles 4-3 when Papelbon, who had blown just one save before this month, blew his second in September, allowing two runs in the ninth.

A few minutes later in St. Petersburg, Fla., Evan Longoria's solo homer in the 12th inning gave the Rays a hard-to-believe 8-7 win over the New York Yankees after they trailed 7-0 through seven.

Add that to the long list of collapses witnessed by generations of devastated Boston fans.

In 1978, they squandered all of a nine-game lead they had on Aug. 13, then rebounded to win their last eight games and force a one-game playoff against the Yankees. Boston led that game, 2-0, but the light-hitting Dent hit a three-run homer in a four-run seventh and New York won 5-4.

In 1986, the Red Sox were one strike away from a World Series championship after taking a 5-3 lead in the 10th inning of Game 6 against the Mets. But New York won 6-5 when Mookie Wilson's grounder went through first baseman Buckner's legs, allowing the winning run to score. Then, the Mets won Game 7.

Another crushing blow came in 2003 in Game 7 of the AL championship series when another Yankee infielder not known for his power, Aaron Boone, hit Tim Wakefield's first pitch in the 11th inning for a series-winning homer.

"I was terrified," Wakefield said later, "that I would be remembered like Buckner."

Papelbon coughed up another lead in the third and final game of the 2009 AL division series, giving up three runs that handed the Los Angeles Angels a 7-6 win.

"Who knows," he said after that game, "I may be replaying this on the TV in my weight room in the offseason and give me a little bit motivation for next season."

Now, he's in a similar spot — the brilliant closer who allowed the runs that ended his team's season.

Four years ago, New York had a seven-game lead on the Philadelphia Phillies with 18 days left but was tied with one game remaining — just as the Red Sox and Rays were tied Wednesday.

The pregame mood in the clubhouse was "quiet, not too much energy. When you lose that big a lead, it's tough," Mets shortstop Jose Reyes recalled on Wednesday.

In that finale, Tom Glavine had one of the worst games of his 21-year career and the Mets lost 8-1 to Florida. A few minutes later, their season was over when the Phillies beat Washington 6-1.

"Things started snowballing. We got cold in every aspect of the game — pitching, hitting and defense," Mets third baseman David Wright said Wednesday. "We had such good players, everybody wanted to be the guy that stepped up and got us out of that. Sometimes when you try too hard, that could have that negative result."

But they opened 2-10, and immediately questions started to surface.

Manager Terry Francona was able to calm the troops, though, and the Red Sox rebounded with an 82-44 mark over the next 4½ months.

And September started like a stroll to the postseason. On the first day of the month, they led the Yankees by 1½ games in the AL East, and the Rays by nine. They started Sept. 4 still nine games ahead of the Rays and one-half game behind the Yankees.

Now the season is over. Francona's eight-year run as manager may be finished as well after their 7-20 record in September.

To be fair, Francona and some of his current players are responsible for bringing the franchise two World Series titles. It's not like this is an organization without championships, an outfit known to be cursed. That label was shredded years ago.

But that doesn't take the sting out of the September Slide.

"What we did this month, it was horrible," Ortiz said. "I have been in bad situations before, and believe me, when these things happen and you drop down like we did, it stays in your head for a long time."