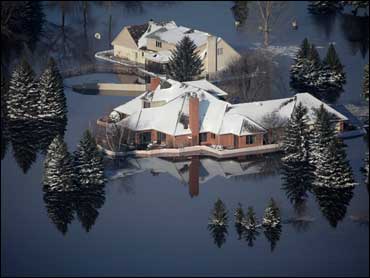 North Dakota officials still intensified their efforts to fend off the high water. They deployed high-tech Predator drone aircraft, called up more National Guard troops and asked residents to be on the lookout for breaches in levees.

Thousands of residents had left their homes.

Officials also cautioned that the city still wasn't out of the woods because the river is expected to stay more than 20 feet above flood stage for several days, testing the strength and integrity of the hastily assembled dikes.

Mike Hudson of the weather service said the Red River may already have reached its high point around midnight at 40.82 feet. As of 8 a.m. it had dropped to around 40.69 feet. But the river can still fluctuate up to a foot, given that ice floes affect the flow of the river and could lead to periodic rises.

The weather service earlier had said the Red River could crest as high as 43 feet, likely on Sunday. But forecasters put out an alert Saturday saying the river is expected to remain below 41 feet and to slowly abate.

"The best news we can take from this is the river has crested," Fargo Mayor Dennis Walaker said.

"But diligence is going to have to be required for at least eight more days and hopefully things will continue to drop," he added. "The only thing that would change all that optimism would be to have a significant storm that could change that. I'm optimistic."

The improved situation is a result of the frigid weather: Cold temperatures froze the water that would have flowed into the river, halting its rise, said Hudson. By the time that water thaws, the biggest flooding threat should have passed, he said.

Forecasters acknowledged that the situation could still take a turn for the worse, with a storm predicted to strike early next week with more snow.

No major levee breaches or other issues were reported during the night.

Officials said they were increasing the number of guard troops from 1,700 to 1,850 and bringing in 300 large bags that hold a ton of sand and could be dropped by helicopter into breaks in the levees.

Predator drones from the Grand Forks Air Force Base began flying overhead Saturday morning, providing officials bird's-eye views of the situation and allowing them to react quickly if flooding worsens.

"They will be up there for 10 hours today providing video of the flood situation," North Dakota Gov. John Hoeven said in an interview with The Associated Press.

President Barack Obama assured the nation Saturday he was keeping close watch on the floods and putting the government's full weight behind efforts to prevent disaster.

"Even as we face an economic crisis which demands our constant focus, forces of nature can also intervene in ways that create other crises to which we must respond - and respond urgently," the president said in his weekly radio and Internet address.

Across the river, the city of Moorhead, Minn., also was dealing with the threat of heavy flooding. Thousands of people had evacuated the city of 30,000, although others have stayed behind.

Officials in Fargo, a city of 92,000 people, said Saturday they didn't immediately need any more volunteers.

Volunteers had piled sandbags on top of miles of snow-covered dikes, with the frigid weather freezing the bags solid as they worked. 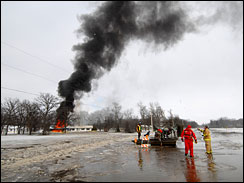 (AP/Chris Polydoroff, Pioneer Press)
Two people died of apparent heart attacks from the exertion of preparing for the flood, said the North Dakota Department of Health. About 50 flood-related injuries have been reported statewide.

Hundreds more Guard troops poured in from around the state and neighboring South Dakota, along with scores of American Red Cross workers from as far away as Modesto, Calif. Homeowners, students and small armies of other volunteers filled sandbags. Missouri Gov. Jay Nixon said Saturday his state's National Guard was sending two C-130 aircraft with at least 34 troops to help.

"It's to the point now where I think we've done everything we can," said Fargo resident Dave Davis, whose neighborhood was filled with backhoes and tractors building an earthen levee. "The only thing now is divine intervention."

Federal officials were prepared to shelter and feed 30,000 people for a week, said Homeland Security Secretary Janet Napolitano. More people than that may be evacuated, but she said officials expect most people would seek help through friends and family first. She said the Coast Guard had participated in 82 rescues by Friday.

Fargo escaped devastation from flooding in 1997, when Grand Forks was ravaged by a historic flood 70 miles to the north. This year, the river has been swollen by heavier-than-average winter snow, combined with an early freeze last fall that locked a lot of moisture into the soil. The threat has been made worse by spring rain.

"I think the river is mad that she lost the last time," said engineer Mike Buerkley, managing a smile through his dark stubble as he tossed sandbags onto his pickup truck after working 29 straight hours.