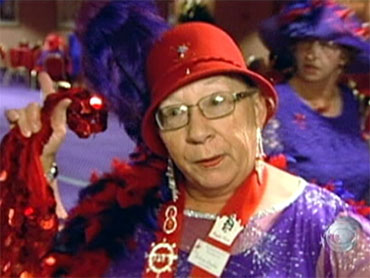 FULLERTON, Calif. - A popular women's rights movement lives by the credo that women have a right to enjoy life no matter their age.

The fabulous red-hat ladies -- members of the largest women's social group in the world -- recently gathered at a convention in Laughlin, Nev., CBS News Correspondent Bill Whitaker reports. They're not volunteers, not raising money or seeking a cure to anything but boredom. Women of a certain age -- most are over 50 -- can just put on a bright red hat and join in.

(Scroll down to watch a report on this story)

"It's a sisterhood," Annette Pope said.

"We get to dress in all our bling," Roberta Kresley said.

"The Red Hat Society pretty much saved my life when I moved from California to Arizona," said Jones. "I didn't know anybody at all, and now I have so many friends."

Pope, of British Columbia, Canada, is in the sandwich generation, caring for an aging in-law and a daughter with special needs.

"If you just sit at home and feel sorry for yourself, that's no good," said Pope. "You've got to get out, and you've got to laugh."

The original mad hatter and founder, Sue Ellen Cooper, was inspired by a 1961 poem, "Warning", about a woman who vows to do her own thing when she gets older.

While it's a movement that not everyone understands, the Red Hat Society now has 70,000 members and 20,000 chapters in 26 countries, all coordinated from hat-quarters in Fullerton, Calif.

"Every club is different," society CEO Debra Granich said. "Some like teas. Some like going to the theater. Any woman can start a chapter."

"It keeps me young," said Simmons-Rogers. "It keeps her younger."

That's a neat hat trick at any age.

Thousands without power in Louisiana weeks after Ida