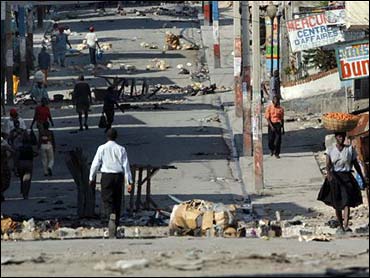 A worker for the International Committee of the Red Cross was kidnapped and killed in Haiti, the humanitarian agency said Friday.

Joel Cauvin, a Haitian, was abducted Wednesday evening and found dead near his home Thursday, the ICRC said.

"The ICRC is deeply distressed by the death of Mr. Cauvin, who had been taking an active part in the organization's humanitarian activities for the past 10 years," the agency said in a statement, adding that it was "extremely concerned about the growing insecurity in Haiti."

It said it would continue to administer humanitarian aid to Haiti despite the current violence in the country.

More than 700 people have been slain in Haiti since September, when supporters of ousted President Jean-Bertrand Aristide stepped up calls for his return from exile in South Africa.

Gangs loyal to Aristide are blamed for most of the violence.