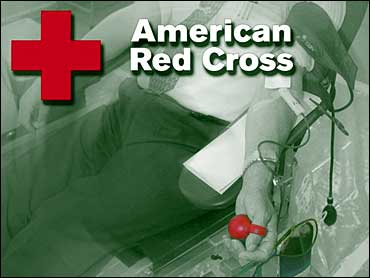 With it he got something he didn't bargain for: Hepatitis C, a contagious disease that can cause serious liver damage and even death.

The blood John received came from the Red Cross.

"They located three of the four donors of the blood that was infused into my body," he says, "and one of those donors tested positive for Hepatitis C."

The risk of contaminated blood is one reason why the Food and Drug Administration is going to the mat with the Red Cross, which provides half of the nation's blood supply and has been violating blood safety laws for 17 years. Now, a federal judge is set to decide whether to slap the Red Cross with huge fines.

According to court documents, the Red Cross has repeatedly taken blood from donors with hepatitis and other diseases. In one of the worst cases, the Salt Lake City Red Cross took blood from hundreds of admittedly high-risk donors who had answered "yes" to questions like: "Do you have AIDS?" or "Have you ever tested positive for AIDS?"

In theory, those mistakes should be caught in the Red Cross' "six layers of overlapping safety."

The FDA agrees that blood tests are more accurate than ever, but has still found problems at every level: infected blood mixed with safe blood, mislabeling and release of contaminated blood, HIV-positive blood lost and assumed "distributed and used."

"Each of these steps is important, and if one of them fails it increases the chance that blood is going to be collected which is infected and possibly distributed," says "Public Citizen" health advocate Dr. Sid Wolfe.

Some of the Red Cross' own workers are disgusted by what they see on the job. Onetime bloodmobile manager Joe Szaller was fired after he persistently complained about unsafe practices.

"I reached the point where I could not sleep at night," says Szaller. "The blood was going out and I knew that it was not going to be in the condition that the FDA expected it to be."

The Red Cross insists the "blood supply is as safe as it has ever been," that it's "working cooperatively with the FDA" and that only a tiny fraction of blood recipients will ever get a disease.

Yet it's impossible to pinpoint the numbers because it turns out nobody's really counting.

The Red Cross tracks infections but doesn't report them to anyone because it's not required to do so.

Though the FDA and Red Cross investigated and confirmed John's case, there's no record of it at the Centers for Disease Control, which reports no such cases in eight years.

"People would rather that I just go away with this situation and be quiet probably," says John. "And I don't think that I can."

And, he wonders, how many others are out there like him.


The Red Cross refused to provide an interview for this report. Instead, the Agency issued what it called a "Position Statement" stating: "The American Red Cross agrees with the FDA's view that our nation's blood supply is as safe as it has ever been. We are working cooperatively with the FDA to address its concerns and are devoting all our energies to that end."

The Red Cross also states: "The Red Cross shares a common goal with the Food and Drug Administration - to save and enhance lives through providing the safest possible products to patients - and we continue to work toward resolution with the agency. We are committed to working with the agency to resolve issues and to be the most effective steward possible when it comes to providing the safest possible blood supply. Because the Red Cross is ensuring that the nation's blood supply is as safe as possible, any potential problem is a serious matter to us. There are at least six layers of overlapping safety that help protect the blood supply, which include self-deferrals, pre-check, completion of the blood donation record, health history screening, confidential unit exclusion, testing and post donation information. DUe in no small part to the $287 million the Red Cross has invested in its biomedical opeartions since 1993, the number of FDA observations have decreased by more than 80 percent since the Consent Decree's inception. The Red Cross continues to invest in its biomedical operations to meet the highest quality and regulatory standards. Our ongoing efforts emphasize quality assurance, information technology and processing/supply chain of infrastructure."