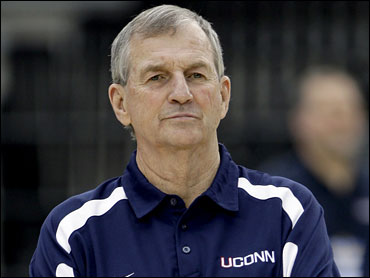 The University of Connecticut said it will review a Yahoo! Sports report that the school broke NCAA rules when it recruited former basketball player Nate Miles.

Miles, a 6-7 guard from Toledo, Ohio, was given lodging, transportation, meals and representation by sports agent Josh Nochimson, and a UConn assistant coach knew about the relationship between the player and the agent, Yahoo reported, citing interviews, documents obtained under the Freedom of Information Act and other sources.

Nochimson, a former student manager for UConn, was considered a representative of UConn's athletic interests by the NCAA and was prohibited from having contact with Miles or giving him anything of value, Yahoo reported.

Records also show that five UConn coaches called Nochimson and text-messaged him at least 1,565 times during a nearly two-year period before and after Miles' recruitment in 2006 and early 2007. Head coach Jim Calhoun had 16 of those communications, Yahoo reported.

UConn released a statement Wednesday saying that when it began recruiting Miles, it consulted its outside counsel, who worked with NCAA staff to examine everything about Miles' amateur status.

"The NCAA's Eligibility Center reviewed all information that it had concerning the student-athlete's eligibility status and determined that he was eligible for his freshman year. The student-athlete departed from the university before ever participating in athletics competition," the statement said.

The university, which said it released numerous public documents to Yahoo, said it is reviewing the article to determine whether action is required.

"The University takes very seriously its responsibilities of NCAA membership and will do all that is expected to follow up on any information related to possible NCAA rules violations," the statement said.

The Huskies are in Glendale, Ariz., preparing for their NCAA Sweet 16 game against Purdue Thursday night. They were among the teams that were ranked No. 1 in basketball polls during the regular season, and are the No. 1 seed in the tournament's West Regional.

Watch a free, live Webcast of all NCAA March Madness games at CBSSports.com.

UConn athletic director Jeff Hathaway, in Boston at the East Regional as an NCAA site representative, declined to comment and referred to the university statement.

Miles was expelled from UConn in October without ever playing a game for the Huskies after he was charged with violating a restraining order in a case involving a woman who claimed he assaulted her. He is now attending the College of Southern Idaho and plays for the school's basketball team.

Yahoo reported that NCAA rules allow only one phone call per month to a prospect or his family in the player's junior year of high school, but said UConn exceeded that limit from late 2006 into 2007, which may be a major recruiting violation.

Former UConn assistant coach Tom Moore, now head coach at Quinnipiac, made three calls to Miles and 27 other calls to Miles' guardian and a person Miles said was his uncle, all in December 2006, Yahoo reported.

Moore acknowledged to Yahoo Sports that he knew Nochimson had contacted Miles "a couple of times," although the documents Yahoo obtained show pages and pages of phone and text message correspondence.

A Quinnipiac spokesman said Wednesday that Moore would have no comment.

In its statement, UConn did not address the specific allegations regarding the phone calls and text messages.

Yahoo reported that Nochimson's relationship with Miles began on Nov. 11, 2006, at a high school tournament in suburban Chicago, and that Nochimson and Moore knew each other from Nochimson's days as a UConn basketball manager.

Moore exchanged several text messages with both Miles and Nochimson on the nights of Nov. 11 and 12, 2006, Yahoo reported. Miles committed to UConn about a week later.

Miles initially said that he had never heard of Nochimson, then said the agent advised him on his education and told him what college coaches and scouts are looking for, Yahoo said.

Nochimson also was the business manager and personal assistant for former UConn standout and current NBA star Richard Hamilton, having gone with Hamilton when he was drafted in 1999 by the Washington Wizards. But Nochimson filed paperwork in June 2008 to decertify himself as an agent with the NBA Players Association, after Hamilton fired him and accused him of stealing more than $1 million.

The NCAA views impermissible contact as a major violation because it creates an unfair advantage that, left unchecked, would lead to student-athletes being inundated with calls from recruiters.

Former Oklahoma coach Kelvin Sampson and his staff made more than 500 improper calls to 17 recruits over a five-year period, leading to Sampson being barred in 2006 from calling recruits or recruiting off-campus for one year. The university also issued self-imposed sanctions, including scholarship reductions and fewer visits to campus by prospective players.

The penalties against Sampson followed him when he became coach at Indiana in March 2006. Within two years, the NCAA found Sampson again was involved in improper calls, having participated in conference calls with prospective Hoosier recruits, and that he misled NCAA and Indiana officials who investigated. He resigned in February 2008 and Indiana was later placed on three years NCAA probation along with self-imposed sanctions.

The NCAA also hit Sampson with a five-year "show-cause" order, one of the harshest penalties it can apply to an individual. It means no NCAA institution can hire Sampson without first showing cause he has served his punishment, effectively preventing him from coaching in the college ranks. Sampson is now an assistant with the NBA's Milwaukee Bucks.