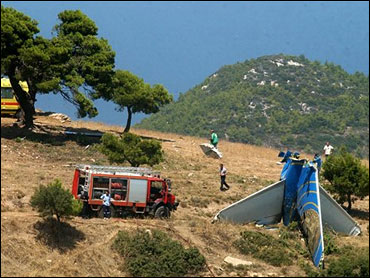 Officials on Tuesday said they had found only the exterior container of the cockpit voice recorder from a Cypriot airliner crash that killed 121 people, hampering investigative efforts into the accident's cause.

Autopsies on the bodies of 20 people on board, including the co-pilot and a flight attendant, show they were alive when the plane went down, coroners said Tuesday.

Fillipos Koutsaftis, Athens' chief coroner, told The Associated Press that co-pilot Pambos Haralambous was alive when the Helios Airways plane crashed on a mountain north of Athens on Sunday.

Pilots of two Greek F-16 fighter jets had reported seeing the co-pilot slumped over the cockpit controls, apparently unconscious, shortly before the crash. They said the plane's German pilot was not in the cockpit.

The voice recorder's internal components were ejected from the container during the crash, said Akrivos Tsolakis, the head of the Greek airline safety committee.

"The only fortunate event in the investigation is that we have the flight data recorder," Tsolakis said, adding that the box would be flown to Paris on Wednesday for decoding.

He said a group of investigators would search for the rest of the voice recorder. He said American experts, including a representative of the plane's manufacturer, were providing assistance.

The voice recorder picks up any conversation inside the cockpit but records only the last 30 minutes of sound. Because the airplane appeared to have been flying disabled for several hours, it wasn't clear how useful any recovered conversations would be for investigators.

Tsolakis said the bodies of the plane's Cypriot co-pilot and one of the flight attendant were found next to the wreckage of the cockpit.

The Helios Airways Boeing 737-300, with six crew and 115 passengers, plunged 34,000 feet into a mountainous area near the village of Grammatiko, 25 miles north of Athens. It had taken off in Cyprus and was heading for Prague, Czech Republic.

In Cyprus, police raided the offices of Helios Airways in the coastal city of Larnaca, near the international airport.

A search warrant was issued "to secure ... documents and other evidence which could be useful for the investigation into possible criminal acts," Cyprus' deputy presidential spokesman Marios Karoyian said.

Investigators also were trying to determine why the pilot was not in his seat shortly before the crash.

The pilots of the two F-16 fighter planes said they saw the co-pilot slumped over the controls. The pilot did not appear to be in the cockpit, and oxygen masks were seen dangling in the cabin.

The fighter jet pilots also saw two people possibly trying to take control of the plane; it was unclear if they were crew members or passengers.

The plane might have run out of fuel after flying for nearly three hours on autopilot, air force officials said, asking not to be named in line with Greek practice.

CBS News Correspondent Mark Phillips reports that records show oxygen masks were deployed during the flight, presumably due to a catastrophic loss of pressure and temperature during the plane's drop in altitude.

This is called high-altitude decompression, authorities say. And, as Phillips reports, a contaminated oxygen supply could have knocked out the crew, which would cause the plane to go on autopilot.

After the crash, authorities said it appeared to have been caused by a technical failure — resulting in high-altitude decompression. A Cypriot transport official had said Sunday the passengers and crew may have been dead before the plane crashed.

A spokesman for the German Foreign Ministry, speaking on condition of anonymity in line with German practice, identified one of the pilots as a 58-year-old German but would not give his full name. It was unclear why there was a discrepancy in his age. Greek and Cypriot authorities often list surnames before given names, and Hans-Juergen would likely be the pilot's first name.

In Berlin, police were guarding the house at the address where the Cypriot government said the pilot lived — a gray stucco house surrounded by a tidy, tree-filled garden in a quiet Berlin neighborhood near the Schoenefeld airport.

The name on the mailbox said Merten. Neighbors confirmed his first name was Hans-Juergen and said he was a pilot in his 50s, but refused to provide any other details.

The airliner's pilots had reported air conditioning system problems about a half-hour after takeoff, and Greek state TV quoted Cyprus' transport minister as saying the plane had decompression problems in the past.

But a Helios representative said the plane had "no problems and was serviced just last week."

A man who claimed to have received a telephone text message from a passenger on the plane faced a preliminary hearing Tuesday for disseminating false information and causing a public disturbance.

Police on Monday arrested Nektarios-Sotirios Voutas, 32, who had called Greek television stations shortly after the crash. He claimed a cousin on board had sent him a cell-phone text message saying: "Farewell, cousin, here we're frozen."

The report that the plane was cold was taken as a sign of decompression — one of the possible explanations authorities have given for the crash. But police said they determined the suspect's story was false.