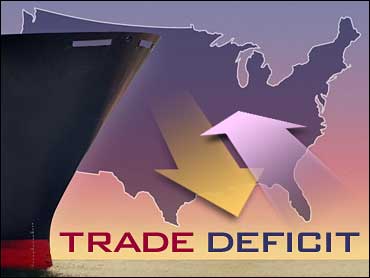 The United States registered a record $489.4 billion trade deficit for 2003 as a rebounding U.S. economy strengthened Americans' appetites for a wide range of foreign-made goods, including cars, clothing and TVs.

The annual trade deficit reported by the Commerce Department on Friday was 17.1 percent larger than the previous record shortfall of $418 billion posted in 2002.

It was also well above the consensus forecast of Wall Street economists of a deficit of $39.6 billion, CBS MarketWatch reports.

The value of foreign goods and services sold to the United States swelled to an all-time high of $1.5 trillion in 2003, representing a 8.3 percent rise from last year.

The latest snapshot of trade activity comes amid rising tensions over global trade and concerns about the flight, or outsourcing, of U.S. jobs to other countries. President Bush's chief economist, Gregory Mankiw, struck a political nerve earlier this week when he described the loss of U.S. jobs to overseas companies as "just a new way of doing international trade."

Painfully slow job growth in the United States is a political sore spot for the president and an issue that Democrats, seeking to capture the White House, like to point out to voters in an election year.

The Bush administration believes the best way to handle the mushrooming trade deficits is to get other countries to remove trade barriers and open their markets to U.S. businesses. But critics point to the deficits as evidence that the president's free-trade policies aren't working and are a factor in the loss of U.S. jobs.

America's manufacturers contend that China is deliberately undervaluing its currency — the yuan — by as much as 40 percent, giving that country a big trade advantage when competing with U.S. companies and contributing to the loss of U.S. factory jobs.

Against that backdrop, the administration has been pressuring China to halt its practice of linking its currency to the dollar and has been pressing for it to let the value of the yuan be set in open markets.

America's trade deficit with Canada last year was a record high $54.4 billion. The United States trade imbalance with Mexico also was a record high of $40.6 billion trade last year. But the trade gap with Japan of $66 billion in 2003 was the lowest since 1998.

The rise in overall imports flowing into the United States last year came as the U.S. economy gained momentum, especially in the second half of the year. Consumers and businesses — feeling more confident that the recovery would be lasting — spent briskly.

Imports of automobiles and parts came to $210.1 billion in 2003, a record high. Sales of a variety of foreign made consumer goods to the United States — a category that includes clothing TVs, furniture and jewelry — also came to a record high of $333.8 billion last year.

The increase in overall exports was helped by a weaker U.S. dollar, which makes U.S. goods less expensive and thus more competitive in world markets, and improving economic times abroad.