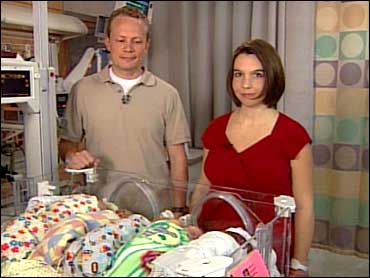 Rachelle and Jayson Wilkinson had two children and wanted a third. But now they have seven after Rachelle gave birth to quintuplets last Tuesday in Phoenix.

On Monday's The Early Show, Rachelle and Jayson, along with Kassidy, Kaydence, Rustin, Kyndall and Ryder, spoke with co-anchor Julie Chen about this historic birth.

In 2005, Rachelle and Jayson turned to fertility treatments when they were having difficulty conceiving their third child. Rachelle went on hormone treatments to stimulate egg production and also underwent intrauterine insemination. While multiple births are common for women who undergo fertility treatments, quintuplets are rare.

Doctors encouraged her to reduce her pregnancy, but she and her husband decided to keep all five children. And she is thrilled that she did now that she has five healthy new babies.

When confronted with the decision of whether or not to keep all five babies — and go against her doctors' advice — Rachelle said that it would've been impossible to decide which babies to eliminate.

"How do you choose?" she said. "Which ones would I have chosen to eliminate? I don't think I could have done that. When you look on the ultrasound monitor and you see, even at 10 weeks, they all have fingers and toes and all their little body parts."

At only 5 feet 2 inches, Rachelle described the process of carrying three girls and two boys for 34 weeks as challenging.

"It was a crowded house. By the end, it was definitely uncomfortable. By the end, there (was) no room for bending or sitting or anything else," she said.

But the pain and discomfort paid large dividends. She said, "When (the quintuplets) were born at 34 weeks, it was worth every minute.

In addition to the five babies, Rachelle and Jayson have a 7 year-old son and a 4 year-old daughter. While the children were initially excited, they are ready for their parents to return home. "They thought it was really great at first. Now they have been asking me if it's OK for us to go home," Jayson said.

The Wilkinson's hope to leave the hospital and return home in one to two weeks.