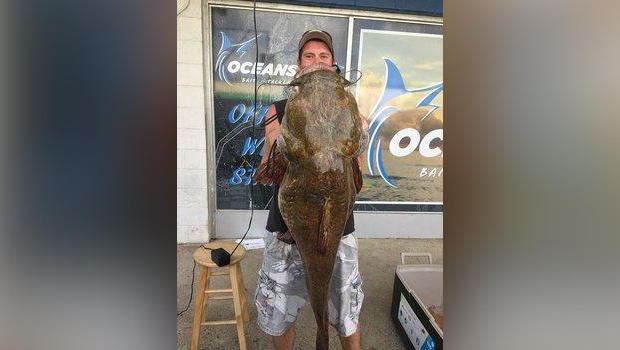 Dill explained that he felt something pulling on the other end of his $20 Walmart rod on Saturday morning while fishing at Lake Smith. After about 15 minutes of tug-of-war with the fish, Dill pulled his catch out of the water and was shocked by what he saw."I put him on the dock, held him down for a minute. He was so big," said Dill, who named his prize fish "Big Earle."

The fisherman brought "Big Earle" to a local tackle shop to be officially inspected and weighed by a Virginia Department of Game and Inland Fisheries biologist.

"It was a monster. It was a true river monster," said Chad Boyce, a fisheries biologist.

"Big Earle" weighed in at an enormous 68.12 pounds. Though it's not yet official, that would smash the state record for a flathead catfish of 66.4 pounds, set in May 1994.

"I talked with some of my older buddies and they said some people fish their whole lives and never get close to a state record," said Dill. "It's a big deal. I'm very proud."

Before Dill's record is cemented, however, the State Record Fish committee will review his application and senior leadership will decide if "Big Earle" is, in fact, the biggest of them all. "I'm waiting on that confirmation, when they send me the plaque, I got it," said Dill.

Boyce, who is a member of the committee, says he doesn't anticipate any problems with Dill's claim on the catfish record.