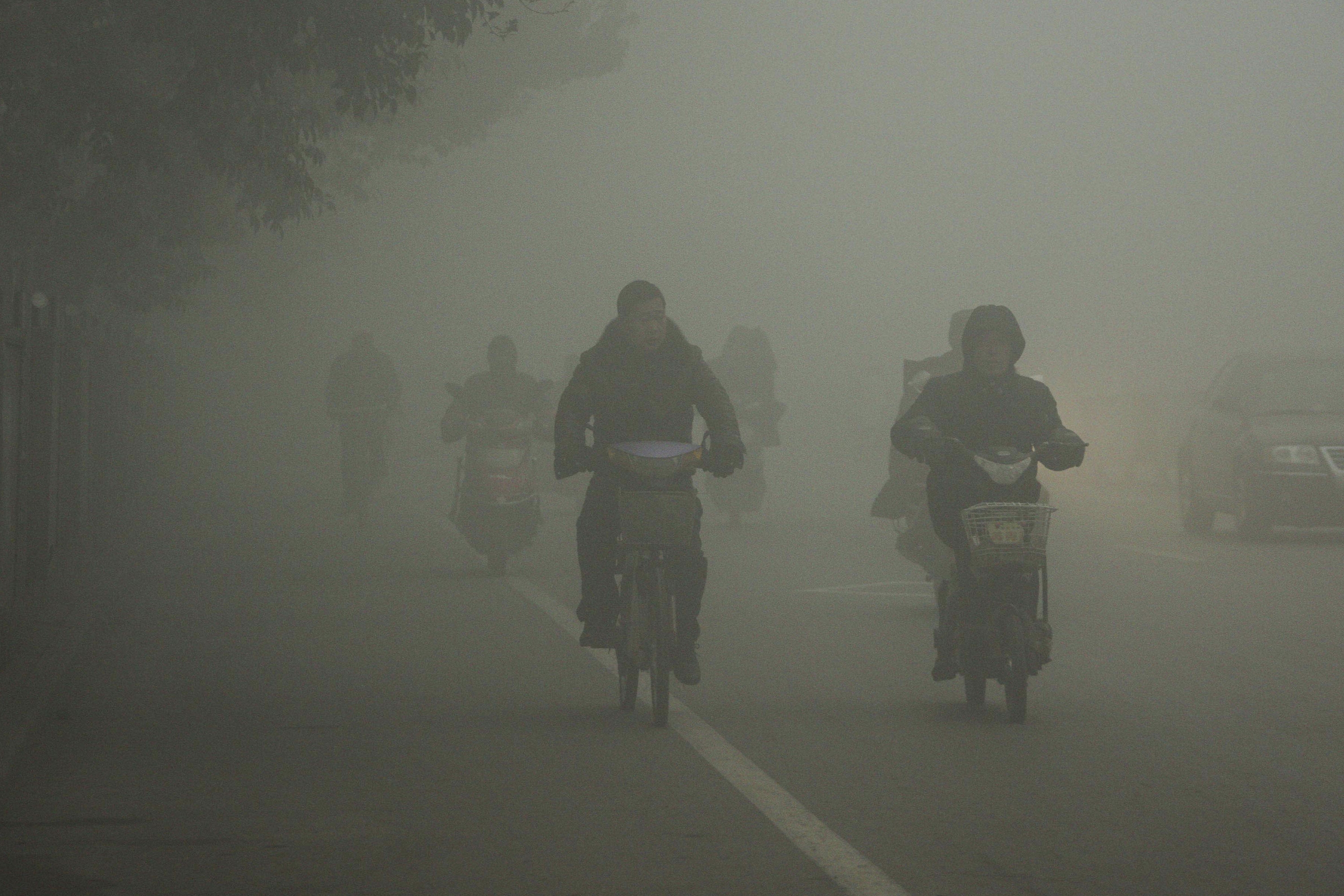 City authorities, who began releasing figures about some of the worst kinds of pollutants early last year, ordered many factories to scale back emissions and were spraying water at building sites to try to tamp down dust and dirt worsening the noxious haze hanging over the city.

Demand spiked for face masks and air purifiers, and hospitals saw surges of up to 30 percent in residents seeking help for breathing problems, state-run media outlets reported. Schools in several districts were ordered to cancel outdoor activities such as flag-raisings and sports classes, and in an unusual public announcement, Beijing authorities advised all residents to "take measures to protect their health."

"It's really terrible. I'm extremely upset, but there's really nothing much I can do," said a Beijing resident out for a morning stroll. Like many Chinese, the man would give only his surname, Kang.

Another man, a 60-year-old retiree surnamed Chen, said his elderly relatives had moved to stay with family members outside the city to avoid the pollution.

"I'm in pretty good shape, but the older folks have a lot of problems with their hearts, breathing, and high blood pressure," Chen said.

Levels of PM2.5 particle pollution over the weekend reached the highest levels since the Beijing government began publicly releasing figures following a public outcry. In separate monitoring by the U.S. Embassy, levels were at 886 micrograms per cubic meter in a reading that was labeled "beyond index."

By Monday, levels had declined to about 350 micrograms on the Beijing government scale — down from a high above 700 but still way above the level of 25 considered safe by the World Health Organization.

PM2.5 are tiny particulate matter less than 2.5 micrometers in size, or about 1/30th the average width of a human hair. They can penetrate deep into the lungs, and measuring them is considered a more accurate reflection of air quality than other methods.

Xi Xinglu, the manager of a Beijing-based online vendor of pollution masks, told CBS News on Monday that his sales of dust-proof masks spiked 40 percent last week. His most popular model is the N95, made by 3M, which costs a little less than one dollar.

Made primarily for occupational health purposes ("grinding, sanding, bagging and general processing of minerals", according to the manufacturer's website), in China, however, the product is advertised as an "anti-PM2.5" device.

"Because these dust particles are relatively fine, they can be directly absorbed by the lung's tiny air sacs. The airway's ability to block the fine dust is relatively weak and so bacteria and viruses carried by the dust can directly enter the airway," Huang said.

Huang said exposure to such high levels of pollution over the short term can cause bacterial and viral infections, and prolonged exposure could result in tumors.

Beijing's air started to worsen on Thursday, and Beijing's monitoring center said the pollution was expected to linger until Tuesday.

Weather conditions are a factor, as a lack of wind means pollutants can easily accumulate and fail to dissipate, said Pan Xiao Chuan, a professor at Peking University's public health department.

"Recent pollution doesn't mean there is an increase in the discharge of pollutants," he said.

The government started publishing PM2.5 readings last year after public demands for more detailed air quality data, prompted in part by a Twitter feed from the U.S. Embassy that reported readings from the building's roof. A growing Chinese middle class has become increasingly vocal about the quality of the environment. Hourly air quality updates are now available online for more than 70 cities.

Air pollution is a major problem in China due to the country's rapid pace of industrialization, reliance on coal power, explosive growth in car ownership and disregard for environmental laws. It typically gets worse in the winter because of weather conditions and an increase in coal burning for heating needs.

Several other cities, including Tianjin on the coast east of Beijing and southern China's Wuhan city, also reported severe pollution over the last several days.