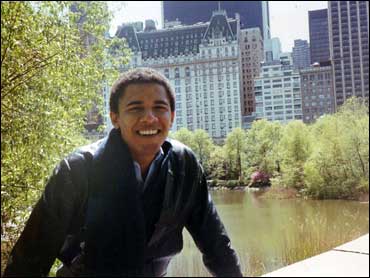 The way Sohale Siddiqi remembers it, he and his old roommate were walking his pug Charlie on Broadway when a large, scary bum approached them, stomping on the ground near the dog's head.

This was in the 1980s, a time when New York was a fearful place beset by drugs and crime, when the street smart knew that the best way to handle the city's derelicts was to avoid them entirely. But Siddiqi was angry and he confronted the bum, who approached him menacingly.

He "stepped right in between. ... He planted his face firmly in the face of the guy. `Hey, hey, hey.' And the guy backpedaled and we kept walking," Siddiqi recalls.

There was a time before Obama wore tailored suits - when his wardrobe consisted of $5 military-surplus khakis and used leather jackets, and he walked the streets of Manhattan for lack of bus fare. It was a time well before the political arena beckoned, when his friends thought he might become a writer or a lawyer, but certainly not the first black man with a real chance to become president of the United States.

Obama spent the six years between 1979 and 1985 at Occidental College in Los Angeles and then in New York at Columbia University and in the workplace. His memoir, "Dreams from My Father," talks about this time, but not in great detail; Siddiqi, for example, is identified only as "Sadik" - "a short, well-built Pakistani" who smoked marijuana, snorted cocaine and liked to party.

Obama's campaign wouldn't identify "Sadik," but The Associated Press located him in Seattle, where he raises money for a community theater.

Together, the recollections of Siddiqi and other friends and acquaintances from Obama's college years paint a portrait of the candidate as a young man.

They remember a good student with a sharp mind and unshakable integrity, a young man who already had a passion for the underprivileged. Some described the young Obama's personality as confident to the point of arrogance, a criticism that would emerge decades later, during the campaign.

Not everyone who knew Obama in those years is eager to talk.

Some explained that they feared inadvertently hurting Obama's campaign. Among his friends were Siddiqi and two other Pakistanis, all of them from Karachi; several of those interviewed said the Pakistanis were reluctant to talk for fear of stoking rumors that Obama is a Muslim.

"Obama in the eyes of some right wingers is basically Muslim until proved innocent," says Margot Mifflin, a friend from Occidental who is now a journalism professor at New York's Lehman College. "It's partly the Muslim factor by association and partly the fear of something being twisted."

The young man Mifflin remembers was "an unpretentious, down to earth, solidly middle-class guy who seemed somewhat more sophisticated than the average college student. He was slightly reserved and deliberate in a way that I sometimes thought betrayed an uncertainty."

But another former Oxy classmate, Robert McCrary, now general manager of a contract sewing company, saw him differently: "He definitely had a cocky, sometimes arrogant way about him. ... He was not open to others."

Of course, he was only 18 when he arrived at the small liberal arts college nicknamed "Oxy." His freshman roommates were Imad Husain, a Pakistani, who's now a Boston banker, and Paul Carpenter, now a Los Angeles lawyer.

Carpenter recalled Obama as "a good bodysurfer" who had "a funky red car, a Fiat," and who also played intramurals &- flag football, tennis and water polo. "He was an athletic guy. He was gifted in that regard," said Carpenter. He also remembered Obama being "super bright. He could get through the course work in a fraction of the time it took me."

Obama had an international circle of friends - "a real eclectic sort of group," says Vinai Thummalapally, who himself came from Hyderabad, India.

As a freshman, he quickly became friends with Mohammed Hasan Chandoo and Wahid Hamid, two wealthy Pakistanis. There were others, Thummalapally recalls: a French student and both black and white Americans, including Jon K. Mitchell, who later played bass for country-swing band Asleep at the Wheel (Mitchell remembers that Obama wore puka shell necklaces all the time, though they were not in style, and that "we let it slide because he spent a lot of time growing up in Hawaii.")

The friends got together often to watch basketball games - they were Lakers fans - and eat the southern Indian food that Thummalapally cooked with his cousin.

There was serious talk, too. Obama had concerns about U.S. foreign policy - including the failed hostage rescue mission in Iran under Jimmy Carter, and American support of the Contras in Latin America.

Thummalapally lived with Obama the summer of 1980. The two ran together daily, three miles in the early morning, often chatting about their dreams. Thummalapally wanted to start a business back home; Obama talked about helping people.

"I want to get into public service," he recalls Obama saying. "I want to write and help people who are disadvantaged."

In 1981, Obama transferred from Occidental to Columbia. In between, he traveled to Pakistan - a trip that enhanced his foreign policy qualifications, he maintained in a private speech at a San Francisco fundraiser last month. Obama spent "about three weeks" in Pakistan, traveling with Hamid and staying in Karachi with Chandoo's family, said Bill Burton, Obama's press secretary.

"He was clearly shocked by the economic disparity he saw in Pakistan. He couldn't get over the sight of rural peasants bowing to the wealthy landowners they worked for as they passed," says Margot Mifflin, who makes a brief appearance in Obama's memoir.

When Obama arrived in New York, he already knew Siddiqi - a friend of Chandoo's and Hamid's from Karachi who had visited Los Angeles. Looking back, Siddiqi acknowledges that he and Obama were an odd couple. Siddiqi would mock Obama's idealism - he just wanted to make a lot of money and buy things, while Obama wanted to help the poor.

"At that age, I thought he was a saint and a square, and he took himself too seriously," Siddiqi said. "I would ask him why he was so serious. He was genuinely concerned with the plight of the poor. He'd give me lectures, which I found very boring. He must have found me very irritating."

Siddiqi offered the most expansive account of Obama as a young man.

"We were both very lost. We were both alienated, although he might not put it that way. He arrived disheveled and without a place to stay," said Siddiqi, who at the time worked as a waiter and as a salesman at a boutique.

The Obama campaign declined to discuss Obama's time at Columbia and his friendships in general. It won't, for example, release his transcript or name his friends. It did, however, list five locations where Obama lived during his four years here: three on Manhattan's Upper West Side and two in Brooklyn - one in Park Slope, the other in Brooklyn Heights. His memoir mentions two others on Manhattan's Upper East Side.

In about 1982, Siddiqi and Obama got an apartment at a sixth-floor walkup on East 94th Street. Siddiqi managed to get the apartment thanks to subterfuge.

"We didn't have a chance in hell of getting this apartment unless we fabricated the lease application," Siddiqi said.

Siddiqi fudged his credentials, saying he had a high-paying job at a catering company, but Obama "wanted no part of it. He put down the truth."

The apartment was "a slum of a place" in a drug-ridden neighborhood filled with gunshots, he said. "It wasn't a comfortable existence. We were slumming it." What little furniture they had was found on the street, and guests would have to hold their dinner plates in their laps.

While Obama has acknowledged using marijuana and cocaine during high school in Hawaii, he writes in the memoir that he stopped using soon after his arrival in New York. His roommate had no such scruples.

But Siddiqi says that during their time together here, Obama always refused his offers of drugs.

In his memoir and in interviews, Obama has said he got serious and buckled down in New York. "I didn't socialize that much. I was like a monk," he said in a 2005 Columbia alumni magazine interview. He told biographer David Mendell: "For about two years there, I was just painfully alone and really not focused on anything, except maybe thinking a lot."

In his memoir, Obama recalls fasting on Sunday; Siddiqi says Obama was a follower of comedian-activist Dick Gregory's vegetarian diet. "I think self-deprivation was his schtick, denying himself pleasure, good food and all of that."

But it wasn't exactly an ascetic life. There was plenty of time for reading (Gabriel Garcia Marquez, V.S. Naipaul) and listening to music (Van Morrison, the Ohio Players, Bob Dylan). The two, along with others, went out for nights on the town. "He wasn't entirely a hermit," Siddiqi said.

Siddiqi said his female friends thought Obama was "a hunk."

"We were always competing," he said. "You know how it is. You go to a bar and you try hitting on the girls. He had a lot more success. I wouldn't out-compete him in picking up girls, that's for sure."

Obama was a tolerant roommate. Siddiqi's mother, who had never been around a black man, came to visit and she was rude; Obama was nothing but polite. Siddiqi himself could be intemperate- he called Obama an Uncle Tom, but "he was really patient. I'm surprised he suffered me."

Finally, their relationship started to fray. "I was partying all the time. I was disrupting his studies," Siddiqi said. Obama moved out.

In July 1985, after spending two years as a writer for a business newsletter and as a coordinator at City College in Harlem for an environmental and consumer advocacy group, Obama left New York for Chicago - where he found a job, a wife and, eventually, a political career.

Andrew Roth knew Obama at Occidental and in New York. He speaks bluntly: "The thought, believe me, never crossed my mind that he would be our first black president."

And yet, here he is, on the brink of the Democratic nomination. And he's gotten there with the help of some of those friends from so long ago.

Neither Hamid nor Chandoo would be interviewed for this story; Hamid is now a top executive at Pepsico in New York, and Chandoo is a self-employed financial consultant in the New York area.

Both have each contributed the maximum $2,300 to Obama's campaign, and records indicate each has joined an Asian-American council that supports his run for president. Both also are listed on Obama's campaign Web site as being among his top fundraisers, each bringing in between $100,000 and $200,000 in contributions from their networks of friends.

Both also attended Obama's wedding in 1992, according to published reports and other friends.

Thummalapally has stayed in contact with Obama, too, visiting him in New York, attending his wedding in 1992 and joining him in Springfield, Ill., for the Feb. 10, 2007, announcement of Obama's run for the White House.

President of a CD and DVD manufacturing company in Colorado Springs, Colo., Thummalapally also is listed as a top fundraiser on the campaign Web site.

Siddiqi has not kept in touch. His has been a difficult road; years after his time with Obama, Siddiqi says, he became addicted to cocaine and lost his business.

But when he needed help during his recovery, Obama - the roommate he drove away with his partying, the man he always suspected of looking down at him - gave him a job reference.

So yes, he's an Obama man, too. Witness the message on his answering machine:

"My name is Hal Siddiqi, and I approve of this message. Vote for peace, vote for hope, vote for change, and vote for Obama."