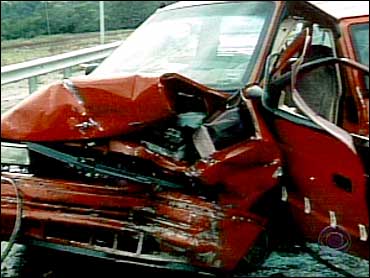 This year, 45 million used cars will be sold.

Many have routine problems. But as CBS News Correspondent Mark Strassmann reports, an unknown number of frame damaged cars with serious safety issues are re-sold to consumers with no warning of the car's ugly history.

Across America, cars that should go straight to the junkyard are instead being rebuilt and resold, to unsuspecting consumers, like Gerri Nash's daughter Connie.

"The hurt gets a little easier with time," says Gerri Nash.

Connie bought a used Plymouth Voyager from a dealer.

Two weeks later, she was in an accident and killed when her driver's side airbag didn't work.

Gerri Nash says her daughter was never told the car she'd bought was in a previous wreck.

Her airbag was broken.

But she never knew there was a problem, because after the van's earlier serious wreck, someone pulled the bulb from the air bag's warning light.

"My daughter could still have been here if it weren't for that, because I was told it would have saved her life," says Gerri Nash.

"It's all over," says attorney Bernard Brown. "It's an ocean of fraud out there."

For example, a rebuilt Mitsubishi Gallant first sold at a St. Louis dealer's auction, with full disclosure about its frame damage. Three weeks later it re-sold at another auction, for $3,500 more, with no mention of its serious damage.

"Usually, a car will move from an auction to another auction, a dealer in one state to a dealer in another state and somewhere the disclosure drops off," says Brown.

After Alison Herren bought a used Honda Civic, she discovered it had been in a major accident and was also listed as stolen.

"I kept telling them, 'I just want you to take the car back. You know you lied to me,'" says Herren. "And they kept saying no."

And she followed what experts say is a consumer's best bet, buying a certified used car from a new car dealer.

"You're buying a car that the factory has said, 'We and this dealer are telling you we're with you when you drive,'" says used car expert Tim Deese.

Selling rebuilt wrecks is a fraud that helps drive the used car industry.

By one estimate, 400,000 of these cars are sold every year to unknowing consumers.