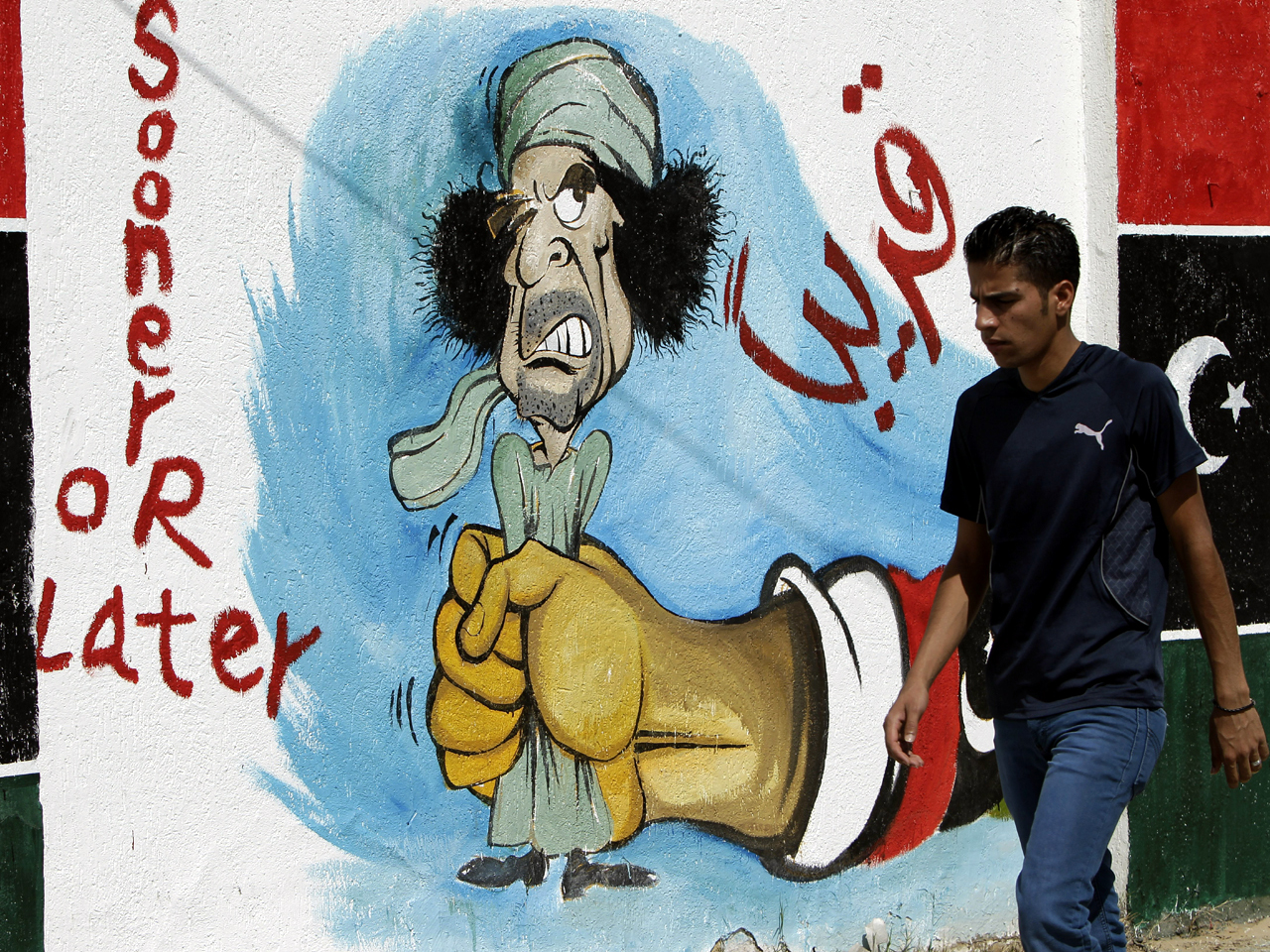 TRIPOLI, Libya - Libya's new rulers believe Muammar Qaddafi may be hiding in the southern desert, possibly in a vast area near the Algerian border, under the protection of ethnic Tuareg fighters, an official said Wednesday.

Abdel-Rahman Busin, a military spokesman in Tripoli, also said revolutionary forces knew Qaddafi's son, Saif al-Islam, was in the regime stronghold of Bani Walid two weeks ago because they held negotiations about his possible surrender. But he said the talks had broken down and it was not known whether he was still in the town.

Special Section: Anger in the Arab World
Report: Many missiles go missing in Libya
Algeria to Qaddafi family: Be quiet or be gone

The revolutionaries' coordinator of the manhunt for Qaddafi, Hisham Buhagiar, told the Reuters news agency that one of the fugitive dictator's sons, Mutassem, was in Qaddafi's hometown of Sirte.

Meanwhile, Qaddafi's daughter Aisha and other relatives have been given refuge in Algeria but were recently warned that they would be expelled from the country if they didn't stop talking to the media.

Revolutionary forces gained control of Tripoli and much of the rest of the North African nation late last month, but Qaddafi fled and has been trying to rally supporters from hiding as fighting continues on three fronts. His sons also escaped and there have been several unconfirmed reports about their whereabouts.

Military officials fear Qaddafi may still be able to stoke violence from his hiding place.

Busin said the military has intelligence that Qaddafi is hiding in the vast southern desert with help from Tuareg fighters. Ethnic Tuaregs, whose nomadic community spans the desert border of Niger, Mali, Libya, Algeria and Chad, are among Qaddafi's strongest remaining supporters.

"We do believe that he is somewhere in that region and we do know that Tuaregs are supporting him, probably because he's paying them," Busin said.

He did not offer evidence and acknowledged the military cannot confirm anything.

"It's a very large bit of land to cover. We don't have the people to cover it all and he could move around quite freely," Busin told The Associated Press.

One report suggested Qaddafi was southwest of the desert town of Sabha, Busin said. He also said a recent attack on the border town of Ghadamis raised suspicion that the fugitive leader was hiding in the surrounding region, a vast area near the Algerian frontier. "Possibly they were just creating a diversion," he said.

Ali al-Mana, the Ghadamis representative on the Transitional National Council, said there was no confirmation that Qaddafi was in the city.

Many Libyans believe Qaddafi's son Saif al-Islam and other regime members are holed up in Bani Walid, 90 miles southeast of Tripoli, where revolutionary fighters have been stalemated with loyalist fighters for weeks.

Busin said anti-Qaddafi forces had confirmation Saif al-Islam was in Bani Walid a couple weeks ago but talks about his possible surrender had broken down and his location was no longer known.

On Tuesday, Syrian-based Al-Rai TV, which has become the former regime's mouthpiece, aired video of Saif al-Islam that it said was taken last week. The same video, however, appears to have been uploaded to YouTube on March 6. A second YouTube video appears to show the same event with an upload date of Feb. 27, less than two weeks after the Libyan uprising began.

Saif al-Islam's last known public appearance was on Aug. 23 in Tripoli. Like his father, he has been charged by the International Criminal Court with crimes against humanity for the regime's bloody efforts to crush the uprising.

Revolutionary fighters also have been unable to rout regime forces from Sirte on the Mediterranean coast. Libyan fighters pounded regime positions in the city with rocket and artillery fire on Wednesday, sending a black cloud of smoke over Sirte's low-slung skyline.

Dozens of trucks mounted with missiles, anti-aircraft guns and anti-tank weapons streamed toward the front lines on the western edge of Sirte and NATO warplanes roared overhead.

Britain's Ministry of Defense said Royal Air Force and NATO aircraft "were very active" over Sirte on Tuesday. The alliance usually only gives details about strikes the next day.

Maj. Gen. Nick Pope said Tornado GR4s twice conducted precision strikes on a large ammunition and vehicle storage depot that has been serving as one of the main bases for Qaddafi's garrison within the city.