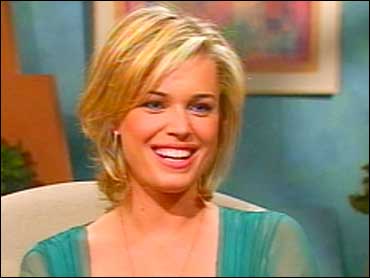 In the sequel to "X-Men," Romijn-Stamos's Mystique is a more complex character and no longer just a fighting machine.

"My character has a little more dimension this time," says Romijn-Stamos. "[It] was nice. And it's a huge cast. Brian Singer did a great job of giving us all the action, kick-ass stuff to do. But, he also gave chunks of meaningful stuff to do."

Romijn-Stamos noted, when Mystique is asked why she chooses to keep her freakish look when she could take the appearance of anyone she wants, she tellingly replies: "Because I shouldn't have to."

Mystique will also be more sexual in the film. And she gets to display some humor.

Romijn-Stamos is still blue over her "costume" as Mystique in the "X-Men" sequel "X2," but she is happy about several improvements. The blue makeup that caused her to become ill has been made less toxic, its application time has been reduced from eight hours a day to five, and she's not required to wear special contact lenses.

"It's a glorified bikini, is what it is," she said. "But the effect is I'm naked, and I've been in denial about that from day one."

"Because we're X-Men united, we're all working [together] in this one, and I had this other blue person to commiserate with," says Romijn-Stamos. "And we had our little blue support group."

The actress will next co-star with Robert de Niro and Greg Kinnear in "Godsend," which is scheduled for a fall release. It's about a couple who clones their 8-year-old dead son.