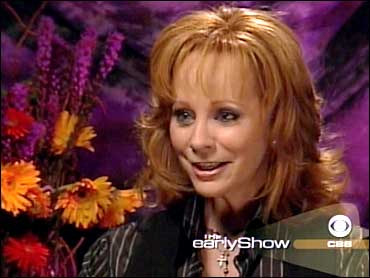 Singer Reba McEntire is stepping on stage at the MGM Grand in Las Vegas Tuesday night as the host of the 41st Annual Academy of Country Music Awards, airing at 8 p.m. ET/PT on CBS. The Early Show co-anchor Hannah Storm caught up with her after she was cutting up at rehearsals.

This is Reba's eighth time hosting the ACM Awards, and she says she likes the gig because she enjoys doing live television. "I like going on, and what you see is what you get. And whether you boo boo, fall down walking out — God don't let that happen, please. But anything can happen," she explains.

Storm, who gets to present an award at the show, joked that her biggest fear was falling on stage while walking in heels. What's Reba's advice for not taking a spill in front of a live audience?

"The strategy is: Do not wear new heels. And if you do have a pair of new heels, take them out into the parking lot and rub 'em on some gravel. Or something that's real rough. So you won't slide," Reba jokingly recommended.

Reba admits singing in front of her peers can be scarier than actually hosting the show. "It's scarier for me to sing in front of all those people in the country music business than to get up and be the host," she says. "Because I know they all sing, but not everybody is comfortable doing the talking parts. So I have a little more confidence with that I guess. … So that's always been the most nerve-wracking thing — to sing in front of my peers."

Luckily for her, she is not performing this year. "Yeah, piece of cake," she jokes.

Reba thinks other performers feel the same anxiety about performing in front of their peers. "To sing in front of 25 other artists is more nerve-wracking than singing in front of 25,000 or 30,000 fans," she explains. "Because those 35,000 fans, they're your adoring fans, they love you, you can do anything. But your peers are out there, 'Uh, huh. What's she doing. Uh huh.'"

"Really, you guys check each other out?" Storm asked.

"What do you think has been the secret, though, in terms of you being able to connect with so many people?" Storm asked.

"For some reason or another, I'm very approachable," she explained. "Like, this afternoon, we were getting ready to fly over here, and we stopped to get gas. And I was sitting in the front seat, Narville was getting out to get gas, and I was sitting up in the front seat. And this woman pulls right up in front of us, and she looks over, and she goes, 'You're Reba, right?' Yes. Wait a minute. She gets out, I open the car door, I go yeah, she goes, 'Hey, listen, we're doing a benefit, what are you doing the rest of the day?'"

Reba is calling Las Vegas "home" for the next couple of months — besides hosting the ACM Awards, she's doing shows at the Las Vegas Hilton all summer long.