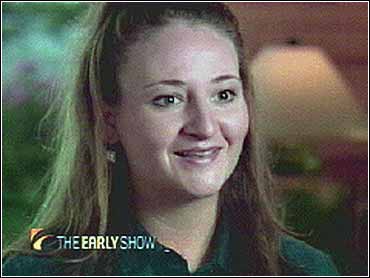 The view of Mount Jefferson in Jefferson County Ore., can be absolutely breath giving.

"Seeing that mountain helps me breathe, helps me know that's the center...the center of my little world," says 27-year-old Milne Macy, who can't imagine living anywhere but beneath the mountain on her husband Mike's family farm.

"I needed someone that felt the same way I did, that we needed to provide for the greatest nation in the world," says Milne, one very proud farmer. But her story, a story CBS News correspondent Steve Hartman found purely by chance isn’t about her farm, her man or her mountain.

It's about something much smaller, 4 foot 9 to be exact. Kara is Milne's younger sister. And over the years they have had a torturous relationship.

"Kara wanted to watch Wonder Woman," says Milne of one of their childhood arguments.

"And Milne wanted to watch Sesame Street. And she has a set of perfect teeth marks that are still on her arm. And I got to watch Wonder Woman," explains Kara.

Twenty-five years later, not much has changed.

"They are actually better when they're apart and see each other occasionally, to be honest with you," says Mike.

And yet they have a closeness few siblings ever know, the one positive side effect of a ravenous disease.

"It's hard to remember how bad it was, because it was hell," says Milne.

Kara started getting sick in first grade and was almost dead by eighth grade, brought down by a measly tick bite.

"At that time people didn't know about Lyme's Disease on the West Coast; it was unheard of," says Milne.

By the time doctors finally figured out what it was and Kara finally started getting better, she had missed virtually all of grade school and much of high school. Of course, you can't just catch up after falling that far behind. But kids don't know that.

"We had to make it happen; we had to get her those credits," says Milne and every day she tutored her little sister.

"Milne would not let me fail," says Kara.

"She graduated valedictorian of her class," says Milne proudly. Kara went on to graduate from Texas A & M. And gives her sister full credit for making it possible.

"Milne was the wings that helped me fly," she says.