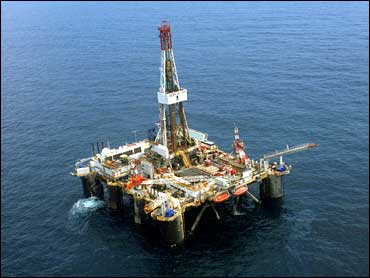 With gasoline hovering around $4.00 a gallon, a new poll shows two out of three Americans now agree with President Bush - that Congress should permit drilling on the outer continental shelf, CBS News correspondent Bill Whitaker reports.

"Experts believe that currently restricted areas … could eventually produce up to 18 billion barrels of oil," Mr. Bush said in a recent speech.

Even in Santa Barbara, Calif., where a huge oil spill from an ocean rig blowout in 1969 turned most Californians against offshore drilling, some people are having second thoughts.

"Well, if it doesn't hurt the environment too bad and it lowers gas prices, I'm all for it," said driver Sean Scott.

According to the federal government's own Department of Energy, drilling off America's coasts would not have a significant impact on domestic oil production or prices before 2030. And off-shore leasing wouldn't even begin before 2012.

Why? Because the leasing process is cumbersome. And currently, there aren't enough rigs or workers or refineries to handle more oil.

Then there's this. Most of the U.S. offshore oil, almost 10 billion barrels, lie off the coast of California. But at the current rate of U.S. consumption - about 20.7 million barrels a day - that would be burned up in 16 months.

"It would have a pretty modest effect even when it did start flowing," said U.C. Berkeley energy researcher Severin Borenstein.

Borenstein says it might drop pump prices as much as 25 cents a gallon in 10 years or more, but: "I think it is very unlikely that we will ever see oil prices that get us back to $2 a gallon or even $3 a gallon."

Opponents of the drilling say what's off our shores is a drop in the bucket.

Supporters say when the bucket is running dry, any little bit helps.