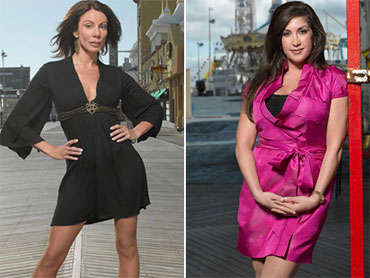 (Bravo)
WAYNE, N.J. (CBS/AP) Danielle Staub of "Real Housewives of New Jersey" knows a thing or two about drama, judging from the first season of the Bravo hit.

But it was the former stripper's hair that landed a fellow cast member on the wrong side of the law last week after a Garden State judge found 19-year-old Ashley Holmes guilty of simple assault. Holmes is the daughter of Jacqueline Laurita, one of the show's main characters.

Staub claimed Holmes threatened her and ripped out a hair extension in the tussle at the North Jersey Country Club in November. The pair was at a fashion show.

Wayne Municipal Court Judge Lawrence Katz on Friday fined Holmes $189, which includes $33 in court costs. Staub had also filed complaints against two other cast mates, Teresa Giudice of Montville and Jacqueline Laurita of Franklin Lakes. But Staub later dropped her claim that they cursed and threatened her.

On the show, Staub admitted she was prosecuted in the 1980's for extortion and cocaine possession. She was also involved in one of the show's more infamous moments with Giudice. See below.