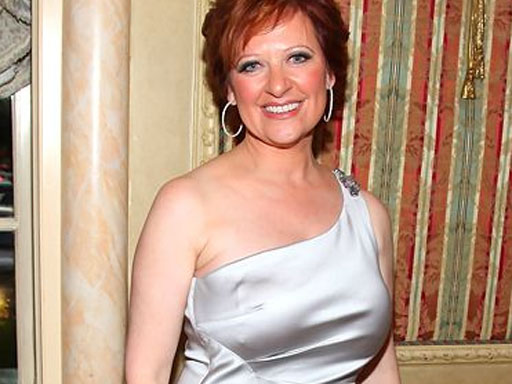 "I just feel so good now, and I feel good in my clothes," the 49-year-old wife and mother of three said.  "I used to feel like eight pounds of sausage in a six-pound bag."

Manzo, who is 5'1" tall, now tips the scales at a svelte 122 pounds - and has her sights set on 115. She looks fab but says sexy looks weren't the only payoff of losing weight.

Manzo said her re-sized body hasn't had any noticeable effect on the series, which gives an inside look at the intimate and sometimes combative relationships between four highly complicated women, including Manzo, Jacqueline Laurita, Terese Guidice, and Danielle Staub.

But the weight loss has given her the confidence to amp up her wardrobe a bit.

"Now I wear things that are a little funkier," she said. "I used to wear only my diamond stud earrings because I had this huge face. Now I wear big hoop earrings. My hair is a little longer. But you'll never see me in a miniskirt."

Weight had never been a problem for Manzo. In the early years of her marriage, she weighed less than 100 pounds.

Of her eating habits in her early thirties, Manzo said, "I would eat huge sub sandwiches and drink soda and then go to bed. But at 40, the wheels started to fall off. My clothes didn't feel comfortable on me, and I would be out of breath walking up the stairs."

She got up to about 141 pounds but didn't do anything about the extra weight until two years ago when her husband opted to treat his own weight problem by undergoing lap band surgery. That procedure reduces the size of the stomach and makes it impossible to eat large meals.

"I saw him literally lose 100 pounds by portion control," she said.

Watching him eat less encouraged her to do the same.

"In the beginning, it was very difficult," she said. "Your body is trained to just eat , especially when you are sitting there talking and laughing" - two things she seems to do a lot of on the show, which often features meals at the Manzo home.

But she stuck with it, and started noticing results - in the mirror and on the stairs.

Now she says she has trouble eating big portions. "I can't eat a whole sandwich or a whole piece of cake," she said. It literally makes me sick."

Along with eating less, Manzo started exercising more and now tries to fit in 45 minutes on the treadmill every day. "I do a lot of cardio," she said.

She also gave up soda.

"It has tons of hidden calories, and if it takes paint off a car, imagine what it does to your stomach," she said. "I was the worst person in the world about giving water to. I hated it. But that is all I drink now. I walk around with a bottle of water all the time."

Well, not all the time. Manzo admits she loves the occasional mojito.

And she's not about to give up sumptuous meals altogether. "If I am out with the girls, and I feel like having a steak or a potato, I am going to have it. You can eat what you want but you have to be smart."

Speaking of real, is the cat-fighting on the show real - or faked for the camera?