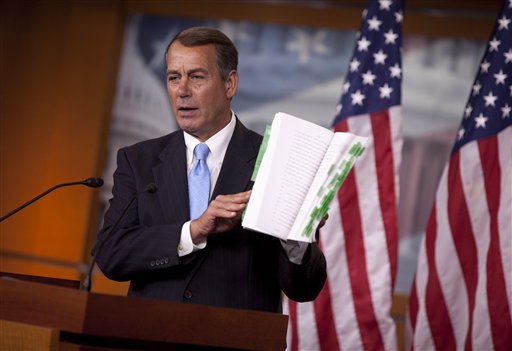 It was a rallying cry at angry health care town halls this summer and has evolved into something of a political movement. Many Americans are demanding that lawmakers actually read the comprehensive legislation they've written _ or at least make it publicly available _ before voting on it.

The push for transparency has become a running side debate in Congress, with lawmakers _ often minority Republicans, but some Democrats too _ pressing leaders to post measures online for 72 hours before a vote.

"I don't think the American people can be left in the dark," House Minority Leader John Boehner, R-Ohio, said this week.

It might sound like a no-brainer. President Barack Obama has made transparency a watchword of his administration, and House Speaker Nancy Pelosi pledged upon taking office to "create the most open and honest government in history."

The Internet makes it all possible.

So what's the problem?

Well, have you ever tried reading a bill.

They can be virtually unintelligible. Written in legalese and peppered with cross references to other laws or statutes that are never explained, they defy understanding by anyone without a law degree or years of legislative experience. Even lawmakers don't usually read the bills; that's what staff members are for.

"The minutiae of legal drafting is not necessarily related to understanding the concepts in the bill," said Rep. Earl Pomeroy, D-N.D., who certainly has had his hand in writing laws in nearly 20 years in the House.

"You could literally get lost in the forest for the trees" trying to read it, he said.

The impenetrability of legislative language is not in itself an argument against posting bills online and letting voters try to figure them out. That happened over the summer with the House's 1,017-page health care bill, with mixed results. Some sections of the bill were taken out of context or misunderstood, often to feed critics' political agendas. At the same time, there was a full airing of concerns that the legislation raised.

Despite the hubbub, the House bill is not even close to the final product that Obama might ultimately sign into law. And that's another part of the problem.

Congress' lawmaking process is such that legislation goes through numerous permutations before being massaged into a final bill that could become law. Along the way, particularly in the Senate, legislating happens on the fly, with bills evolving in real time during committee meetings. Even after debate begins in the Senate, changes are the norm.

Posting every incremental development online could be impractical and hardly enlightening for most Americans, defenders of the current system suggest.

But transparency advocates see that argument as part of the problem. They point to instances in which controversial provisions were added quietly, at the 11th hour, unbeknownst to most. Consider this: A provision was tucked into this year's economic stimulus bill in last-minute, closed-door talks that allowed insurance giant American International Group to pay huge executive bonuses.

If lawmakers had put the brakes on the process and exposed it to sunlight, that development and others like it might have been avoided, advocates argue.

"People became outraged when they discovered that the norm was for legislators to vote on legislation they hadn't read," said Colin Hanna, head of a group, Let Freedom Ring, that is asking lawmakers to pledge to read health overhaul legislation before voting.

After all, the nation's health care system represents one-sixth of the economy.

Eight moderate Democrats wrote to Senate Majority Leader Harry Reid, D-Nev., this week asking for any health care bill to be put online for 72 hours along with an analysis from the nonpartisan Congressional Budget Office before the Senate acts. They also want all amendments to be publicly available.
Reid has not fully agreed to the request, though spokesman Jim Manley said lawmakers would probably have 72 hours to review the legislation before it comes to the floor.

House leaders also have committed to giving lawmakers 72 hours to review the health bill, though they haven't agreed to demands from some in their caucus to apply that rule to every piece of legislation.

A few weeks ago, the openness issue occupied the Senate Finance Committee for a good portion of a day's work on its health overhaul bill.

Unlike other committees, the Finance panel has traditionally worked from plain English _ called conceptual language _ rather than legislative text. The reasoning, in part, is that its issues are so abstruse _ involving IRS code and other complex items _ that some senators argue it's the only practical way to proceed.

Sen. Kent Conrad, D-N.D., sought to prove that point by reading at some length from the bill's legislative text. "By striking amounts for purposes and inserting amounts" and "IV, for 2013, the sum of AA, one-third of the quotient of AA," he said.

Sen. Pat Roberts, R-Kan., replied that Conrad had been talking about a home health care provision that he said had caused a lot of problems.

Conrad corrected him. It was a provision on Medicare managed care plans.

The committee rejected an amendment for the 72-hour requirement. The plain English version of the committee bill and a cost estimate have been online for days, but the legislative language won't be publicly available until after the committee votes on Tuesday.

How long would it actually take to read the bill? A group of voice actors got through the House legislation in about 24 hours; the plain-English version of Baucus' bill took a bit over half that time.