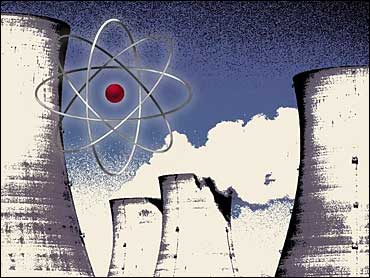 A hijacked commercial airliner loaded with explosive jet fuel like the one that hit the Pentagon on Sept. 11 could not penetrate a U.S. nuclear power reactor and release deadly radiation, according to a nuclear industry study announced on Monday.

The report's conclusions are intended to calm a nervous public and nuclear industry critics worried the nation's 103 nuclear reactors, especially those near big cities, are susceptible to a Sept. 11 type of attack.

The study was commissioned by the Nuclear Energy Institute, an industry trade group, which hired independent consultants to analyze what damage would occur if a Boeing 767 airplane filled with fuel crashed into a nuclear power plant.

"We think it's extremely unlikely that the aircraft would be able to penetrate the reactor," said Stephen Floyd, NEI's senior director of regulatory reform. "We feel very, very confident about the containment structure."

Floyd announced the study's preliminary findings during a National Press Foundation seminar on the threat of terror attacks on nuclear power plants.

The study was based on scenarios in which the wide-bodied aircraft crashed into a nuclear reactor traveling at about 300 miles per hour, the same speed as the plane that damaged the Pentagon.

It did not analyze a nuclear reactor hit by a plane traveling at the higher speeds of the two airliners that destroyed New York's World Trade Center.

Security has been boosted at nuclear plants since the Sept. 11 attacks, but some lawmakers and environmental activists have urged regulators to station military personnel with sophisticated weapons at nuclear plants to repel a hijacked plane.

The Nuclear Regulatory Commission said earlier this month it would analyze what devastation could occur if a fuel-laden commercial airliner crashed into a reactor. U.S. plants are designed to protect the radioactive core from tornadoes, hurricanes, fires and earthquakes.

The industry's report used computer models to analyze the impact of a plane hitting a reactor from different angles. Neither the plane or its engines would be able to slice through a reactor's protective concrete shell, which is several feet thick at the base, the study said.

The experts studied several scenarios, including the reactor taking a direct hit from an airplane or being hit by the engine under an airplane's wing.

A resulting fire from the airplane's jet fuel might engulf a nuclear reactor, but would not cause it to collapse like the World Trade Center, the industry report said.

The report did not consider the scenario of a reactor being hit by an airplane flying at more than 500 mph, the speed at which the two planes hit the World Trade Center last September.

A pilot flying closer to the ground and aiming at a nuclear reactor would not be able to control an airplane at 500 mph because of pressure waves that would be created, it said.

Hijackers also could not nose-dive a commercial airliner into the top of a reactor where the concrete shell is thinnest, because the plane would break apart at such a steep angle and high speed, according to the study.

"The plane in all likelihood would destroy itself before it could hit the target," Floyd said.

The report was viewed skeptically by other experts.

Edwin Lyman, president of the Nuclear Control Institute, questioned the methodology of the report funded by U.S. utilities and said his group's review has found that a Boeing 767 airliner could crash through a reactor.

However, Lyman's group based its conclusions on an airplane flying at maximum cruising speed of 530 mph. Such a high speed just a few hundred feet off the ground would make it difficult to accurately strike a nuclear plant.

Lyman also reiterated his group's recommendation that federal regulators should consider asking the Defense Department to place anti-aircraft missiles at nuclear power plant facilities to shoot down a hijacked plane aiming for the site.

The nuclear industry opposes such a plan, saying it runs the risk of shooting down a commercial airliner that has simply strayed off its flight path. A military commander would have only about 45 seconds after spotting an airplane to decide if it was an attack and should be fired upon.

The report will be reviewed by industry experts before being released to the public at the end of the summer.