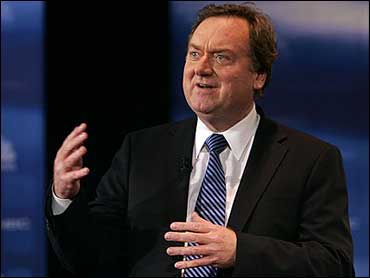 Fellow journalists and politicians from both parties have had the following reactions to the death of NBC News journalist Tim Russert.


CBS News Chief Washington Correspondent And Anchor Of "Face The Nation" Bob Schieffer: "Tim was the best of our profession. He asked the best questions and then he listened for the answer. We became very close friends over the years. He delighted in scooping me and I felt the same way when I scooped him. When you slipped one past ol' Russert, you felt as though you had hit a home run off the best pitcher in the league. I just loved Tim and I will miss him more than I can say, and my heart goes out to his son, Luke, and his wife, Maureen."

"CBS Evening News" Anchor and Managing Editor Katie Couric: "Tim Russert was so many different things. He was a big teddy bear of a guy. But he was also a pit bull of an interviewer. He always held people's feet to the fire, often using their past words with great effect to reveal a flip-flop or hypocrisy. While he was incredibly tenacious, he always did it with great humanity and respect." (Click here to read Couric's full post in "Couric and Co.")

CBS News senior political correspondent Jeff Greenfield: "It was Tim's great gift to combine civility with tough-minded, relentless probing of a public figure's ideas and policies. He rarely if ever let the canned talking points go unchallenged. He invented the technique of putting the subject's words on the table, and insisting on pushing the guest into attempting to square the circle. He was as good as it gets."

CBS News "Early Show" Co-Anchor Harry Smith: "Man did Tim Russert love politics. He ate it, lived it and breathed it. His knowledge of it was organic, internal and genetic. It showed in his every broadcast, in his every debate appearance. He was not afraid, nor was he intimidated. And because he was so good at what he did, we were the beneficiaries. He was in that chair for us, and we were damned lucky he was."

ABC "World News" Anchor Charles Gibson: "Tim projected vitality -- always excited about the stories he covered and intrigued by the people he interviewed. That's what made him so good, and his passing so hard to absorb. His competitors -- just like his co-workers -- held Tim in the highest of regard."

ABC "This Week" Anchor George Stephanopolous: "Tim loved everything about politics and journalism -- because he believed in it. Every Sunday morning he brought that passion to his table and made all of us better. My thoughts and prayers are with his family -- especially Maureen, Luke and his father Russ."

President Bush: "Laura and I are deeply saddened by the sudden passing of Tim Russert. Those of us who knew and worked with Tim, his many friends, and the millions of Americans who loyally followed his career on the air will all miss him. As the longest-serving host of the longest-running program in the history of television, he was an institution in both news and politics for more than two decades. Tim was a tough and hardworking newsman. He was always well-informed and thorough in his interviews. And he was as gregarious off the set as he was prepared on it. Most important, Tim was a proud son and father, and Laura and I offer our deepest sympathies to his wife Maureen, his son Luke, and the entire Russert family. We will keep them in our prayers."

Sen. John McCain, R-Ariz.: "I am very saddened by Tim Russert's sudden death. Cindy and I extend our thoughts and prayers to the Russert family as they cope with this shocking loss and remember the life and legacy of a loving father, husband and the preeminent political journalist of his generation. He was truly a great American who loved his family, his friends, his Buffalo Bills, and everything about politics and America. He was just a terrific guy. I was proud to call him a friend, and in the coming days, we will pay tribute to a life whose contributions to us all will long endure."

Sen. Barack Obama, D-Ill.: "We all I think have heard the news about Tim Russert. I've known Tim Russert since I first spoke at the convention in 2004. He's somebody who overtime I came to consider not only a journalist but a friend. There wasn't a better interviewer in TV, not a more thoughtful analyst of our politics and he was also one of the finest men I knew. Somebody who cared about America, cared about the issues, cared about family. I am grief stricken with the loss and my thoughts and prayers go out to his family. And I hope that even though Tim is irreplaceable that the standard that he set in his professional life and his family life are standards that we all carry with us in our own lives."

Sen. Hillary Clinton, D-N.Y., and Former President Bill Clinton: "We were stunned and deeply saddened to hear of the passing today of Tim Russert. Our thoughts and prayers are with his wife Maureen, his son Luke, his father who we all have come to know as Big Russ, his extended family and all of his many friends and colleagues at NBC who have suffered a tremendous loss. Always true to his proud Buffalo roots, Tim had a love of public service and a dedication to journalism that rightfully earned him the respect and admiration of not only his colleagues but also those of us who had the privilege to go toe to toe with him. In seeking answers to tough questions, he helped inform the American people and make our democracy stronger. We join his friends, fans and loved ones in mourning his loss and celebrating his remarkable contribution to our nation."

Senate Majority Leader Harry Reid, D-Nev.: "I was greatly saddened to learn of Tim Russert's untimely death. Tim was a warm and gracious family man with a great zest for life and an unsurpassed passion for his work. His rise from working-class roots to become a well-respected leader in political journalism is an inspiration to many. Tim asked the tough questions the right way and was the best in the business at keeping his interview subjects honest. My thoughts are with his family."

Former GOP Presidential Candidate Mike Huckabee: "I join with other Americans in expressing both shock and grief with the news of Tim Russert's untimely death. He was a significant figure in American politics, deeply respected, but also deeply feared by those who sat across his table on "Meet the Press." He was fair, but always relentless in his pursuit of truth and honesty from those who dared to lead the nation. His has been a commanding voice in public affairs and in many ways the E.F. Hutton of political talk. Our prayers go out to his family and we will all mourn the loss of his voice."

House Republican Leader John Boehner, R-Ohio: "Tim Russert was so much more than the longest-serving moderator in history of NBC's Meet the Press. He was a loyal and loving son. He was a devoted husband and father. He was one of the smartest, toughest television news journalists of all time. And he was an astute student of American politics. I can say from experience that joining Tim on Meet the Press was one of the greatest tests any public official could face. Regardless of party affiliation, he demanded that you be straight with him - and with the American people who were watching. Tim's 'white board' analysis of the Electoral College has become a fixture on election nights, and frankly, it is difficult to imagine what that night will be like without him this year."

Sen. Joe Lieberman, I-Conn.: "Tim Russert was the embodiment of journalistic integrity and clarity who shed light on how our politics and our government work. Tim became an American institution and the Explainer in Chief of our political life. I have very fond memories of Tim both on and off the air. He will be truly missed by all Americans and my prayers are with his family that he loved so much."

Rep. Dave Obey, D-Wis.: "Tim Russert's death is not just a body blow for NBC News, it is a body blow for the nation and for anyone who cherishes newsmen and women who have remained devoted to reporting hard news in an era increasingly consumed by trivia. He was a great newsman and a great human being."