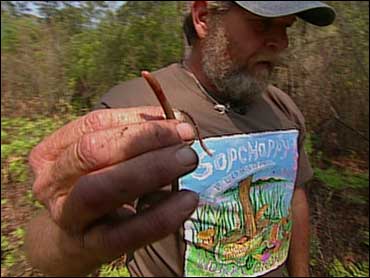 For the traveling feature reporter, Sopchoppy, Fla., is a gold mine - thanks to the locals who mine something else entirely.

CBS News correspondent Steve Hartman reports that when CBS News legend Charles Kuralt first discovered the worm grunters here nearly 40 years ago, he thought it had to be a trick.

"We would have never believed it if we hadn't seen it," Kuralt said in his 1972 report.

Today, Gary Revell is one of the few people left who still collects worms the old-fashioned way.

Apparently, to earthworms here in the Florida panhandle, the vibration of metal on wood feels exactly like a mole digging. And since moles eat worms, the worms low tail-it to higher ground, where they're collected and sold as fish bait.

Since Kuralt first introduced "worm-grunting" to America, the people of Sopchoppy have started an annual festival. Kids compete in grunting competitions while the adults watch Kuralt's original story over and over on a loop.

Kuralt told viewers, "It turns out that dozens of people make a living at it around here and it's not a bad living."

Ironically, his story wasn't too well-received at first.

He said that at the time, "A couple hundred dollars a week is not an unusual income."

Grunters groaned that he gave too much information.

Among the many people watching Kuralt's story that night were some government bureaucrats -- agents from both the IRS and the U.S. Forest Service. Within weeks, the Sopchoppy worm grunters were taxed and regulated.

Today, worm grunters are much more media savvy, keenly avoiding that whole can of worms.

Asked how much money can be made in a year collecting worms, Revell said, "It's hard to predict."

"This is my family's way of making a little grub and we're happy," he says.

As Kuralt told it, "Therefore, do not scoff at worm grunting. After all, you probably thought that the way to get worms is with a shovel. Ha! Shovels are for kids and amateurs." (And people who don't want to get audited)?

There are about a dozen full-time worm grunters left, and they say the economy is hurting them too. Not as many people are fishing -- or at least that's their story.