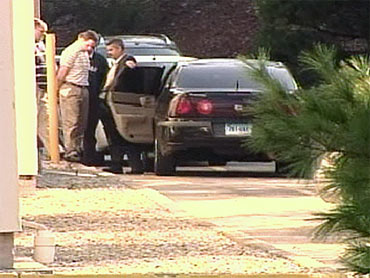 NEW HAVEN, Conn. (CBS/AP) Police have closed the noose around Raymond Clark III, a 24-year-old lab technician who had previously been named a "person of interest" in the death of Yale graduate student Annie Le.

An arrest warrant was issued for Clark and he is now in custody. Bond is set at $3 million. Police made the announcement at a news conference Thursday morning.

Earlier Thursday morning, police were stationed outside a hotel, about 25 miles north of New Haven, where Clark was reportedly staying. A crowd of reporters had gathered across the street. Police in marked and unmarked cruisers had been keeping a steady watch.

As of 8:36, Clark had been taken from the hotel without incident.

The state medical examiner said Wednesday that Le was choked to death; her body was found stuffed in the basement wall of a Yale medical school research building on Sept. 13, which was to have been her wedding day.

On Tuesday, authorities collected DNA from Clark's hair, fingernails and saliva which they hoped to compare with more than 250 pieces of evidence collected at the crime scene near the Ivy League campus in New Haven, and from Clark's apartment in Middletown. Police also searched his apartment and took his Ford Mustang and had briefly taken him into custody before releasing him Wednesday.

"It's all up to the lab now," New Haven Police Chief James Lewis said at a news conference Wednesday. "The basis of the investigation now is really on the physical evidence."

Apparently, the lab has spoken.

Le's body was found stuffed behind the wall of the basement where lab animals are kept. The Connecticut state medical examiner said Wednesday that Le died of "traumatic asphyxiation." Traumatic asphyxiation could be consistent with a choke hold or some other form of pressure-induced asphyxiation caused by a hand or an object, such as a pipe.