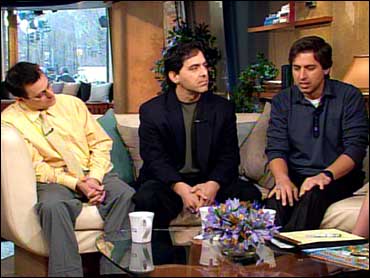 Emmy Award-winner Ray Romano, from the top-rated CBS sitcom "Everybody Loves Raymond," has a new project: a children's book.

It's called "Raymie, Dickie And The Bean - Why I Love And Hate My Brothers." He wrote it with those brothers, Richard (who's older) and Robert (who's younger).

"When I thought about collaborating with them, I immediately thought of the trouble," Ray Romano says of his brothers to The Early Show co-anchor Hannah Storm.

The story follows the brothers to an amusement park and tells how they sometimes must do annoying things to help each other. The brothers occasionally fight and argue, but underneath it all, they love each other.

"We thought a trip to the amusement park is everything," Ray Romano notes. "It's fun, enjoyable; it's exciting and aggravating because we're with each other. That would be a good way to show all of the sibling rivalry that you go through. This isn't in a particular episode, but this is what it was like for us."

Click here for a sampling of the content of the book and its illustrations, which were done by Gary Locke.

Ray Romano notes, "You see the fighting and you also -- we don't hit it on the head -- but you can see that there is brotherly love there. It comes out in different ways. I think, as we've gotten older, we appreciate it."

Being the middle child, Ray Romano quips that probably explains why he is the troubled child in the family.

Robert is seven years younger and Richard only a year-and-a-half apart from Ray. So, says the comedian, growing up, Richard would beat him up and he would take it out on Robert.

Asked if Richard and Ray were competitive while growing up, Ray Romano says, "Very competitive, except for girls, though. We never really liked the same girl. I didn't have a girlfriend until I was 21. So, you (Richard) beat me there."

But pointing out it's ironic that he makes all of the money, Ray Romano says he admires his brothers, saying Richard is a New York City police officer and Robert is a school teacher.

"It's a very noble profession and it's not right!" Ray Romano exclaims.

But being a teacher has its perks. Robert says he got to read his book to his students.

Ray Romano adds the book passed the test in his house. "I have a 7-year-old who I've read it to, and you can tell if she thinks it stinks, then I have trouble."

A CD recording of Romano reading the story is included. The book is geared for kids four to seven-years-old.

Asked if growing up, they knew Ray Romano had a future in show business, Richard Romano says, "I definitely could tell. He was a clown and he had a quick wit. Everybody really loved him. Hence, the title of the show."

The character Robert is modeled after both brothers, Ray Romano explains: "We were only going to have one brother on the show, and he was going to be the cop. Of course, my mother said, 'How about Robert?' So we gave them Robert's name. We couldn't call Brad Garrett 'The Bean' because that just didn't fit."

For the final episode of "Everybody Loves Raymond," three months ago, Ray Romano notes, his brothers were with him.

"Very emotional. It was great," he says. And he gave everybody rings.

Showing the ring, Ray Romano says, "I gave everyone in the crew, and everybody loves the ring. It has the number of the episodes through the years - 96 through 2005."

So will there be more books from the brothers?

"There will be," Ray Romano answers. "It will be edgier, the next one.

"From the amusement park to, 'What Happened In Camp Stays In Camp," he laughed.

By the way, Robert admits his brothers still call him "The Bean." Richard, however, quickly notes they stopped calling him Dickie 15 years ago.