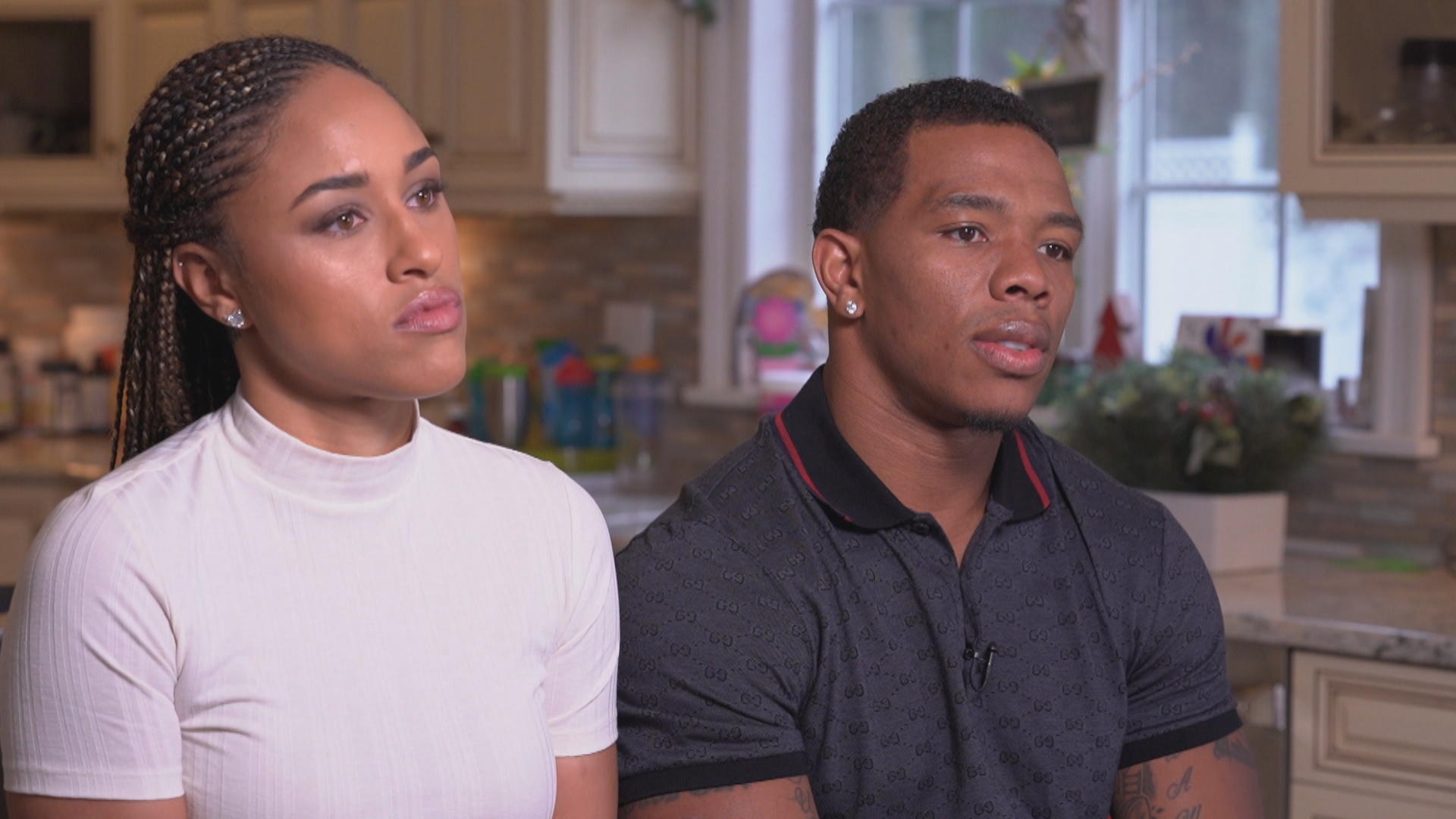 In February 2014, the former Baltimore Ravens running back was seen dragging his unconscious fiancee from an elevator. A second video revealed later, showed Rice had punched her and knocked her out. His team dropped him and Rice hasn't played professional football since. Rice and his fiancee, Janay, married just weeks after the incident and now have two children together.

"CBS This Morning" co-host Gayle King spoke to the couple at their Connecticut home about why they stayed together, how they're making their marriage work and how the Kareem Hunt video affected their lives.

When Ray first saw the tape of Hunt assaulting a woman outside his Cleveland residence he knew his name would come up again.

"Well, obviously, you know, you look back and you see the similarities," said Ray, who became somewhat of a poster boy for domestic violence caught on tape.

"Early on you could feel like 'Why they keep bringing my name up?' You can make excuses or you can actually do the hard work," Ray said.

The former football star has said that there were many underlying issues he hadn't dealt with before the incident that cost him his career.

"One of the underlying issues for me was – I never wanted to ask for help. Football, for me, was my counseling. It was my therapy. It was my psychologist. It was everything," Ray said.

Asked if he witnessed domestic abuse in his own home growing up, he said, "It was more of my mom going through a bad relationship...that's when I started to realize I was normalizing abnormal things. I was a man at 11, and then at 21 I got drafted and became a boy."

"Yes. We didn't have a physical abuse problem. But I can say there were different forms of abuse that take -- that took place. Was it emotional? Financial? You get to the physical, and that's obviously, like, if it's one time, it's still one time too many," Ray said.

Janay said she had no idea she was in an abusive relationship at the time.

"I know that, you know, I just thought we were being a typical, you know, boyfriend and girlfriend. Like, we argue and…I didn't really sit back and think about it until I was forced to think about it," Janay said.

Janay has never seen the video from inside the elevator – the one where her now-husband punches her. She said it was the first and only time he physically abused her.

"I was there. I lived it. I don't really need to relive it over and over again just to appease the world," she said.

When Ray looks at the tape now, he sees a person he hates.

"I hate that person. I hate him….Somewhere down the line everybody who's sayin', 'Does he deserve a second chance for football?' And this that and the other – I actually got my second chance," Ray said.

A second chance with his wife.

"During my darkest moments, and I used to ask myself, 'How could she even be – want to support me?....That's understandable. But I think what's misunderstood about us is that the friends we were before the incident. That's why, like I said, when I look at Kareem Hunt, I wanna know what his life was like. I want to know what happened in life. I know Kareem has apologized, and has expressed remorse for survivors of domestic violence," Ray said.

Still, for some, this may just seem like an attempt to get back on the field. Ray denies that's his plan.

"Well, see that for me, is something that I understand why it was being said early on about, you know, is this a ploy to get back into football. And I'll be the first one to say it. I don't have to retire to tell you I'm done with football. The pressure I was under of being a star that was the person I hated the most," he said.

Janay knows it's hard for people to understand why she gave him a second chance.

"And I'm not here to force people to understand. It was never a thought whether I was going leave or not, because I knew that that wasn't him in that moment. This is somebody I've known since I was 15 years old. I knew that we had work to do, and I was willing to move forward and put in the work," Janay said.

Ray doesn't believe he deserves another chance to play football, intentions aside, and said he's met with the NFL about how they're handling domestic abuse as an organization.

"They're trying to do the right thing…I know they are working with groups to try to get more of an understanding. And they're doing the work," he said.

In addition to Kareem Hunt, the NFL is also dealing with Reuben Foster. Last month the San Francisco 49ers released the linebacker after a domestic violence arrest. The Washington Redskins signed him just days later, though he's ineligible to play or practice with the team while the NFL continues to investigate.

Ray said he hasn't spoken to Kareem Hunt but would be willing to.

"I would love to help anyone that's willing to go the long haul."

We reached out to the NFL, which confirmed that Ray shared his story as part of the league's domestic violence education program. The NFL said he has an important message to share and that his commitment is sincere.