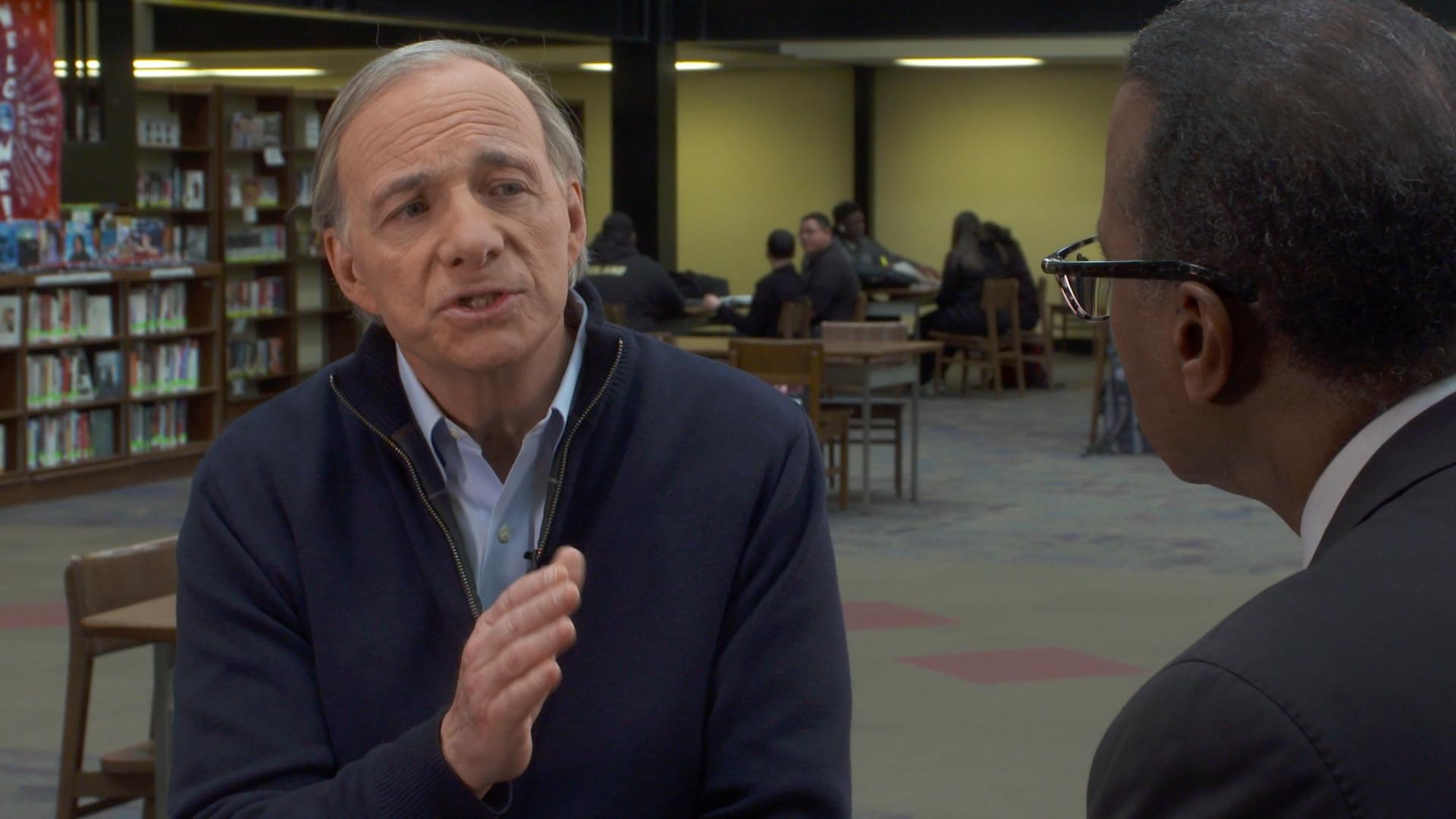 One of the most successful investors of all time is somebody you probably have never heard of despite his net worth of $18 billion. Ray Dalio avoids extensive interviews and had not allowed news cameras full access to his firm, Bridgewater Associates, until our visit. He predicted the 2008 financial crisis. Today he sees a prolonged period of sluggish economic growth and the threat of a confrontation between the U.S. and China. But, as we first reported in April, there is a greater danger Dalio wanted to warn us about. So we figured it was a good investment of our time to do a deep dive on the principles of Ray Dalio.

When a billionaire invites you to his boat, you gotta go.

Bill Whitaker: "It looks like a terrific day to be out on the water"

Especially if he sends a chopper to take you. We flew just north of Nassau in the Bahamas to meet Ray Dalio.

"Alucia" is a 180-foot long research ship and Ray Dalio's pride and joy.

Dalio, who loves scuba diving, bought it nine years ago. He wouldn't tell us for how much, but he had it decked out with scientific gear – including submarines that can dive a half mile.

Bill Whitaker: This is fantastic.

Bill Whitaker: This is fantastic.

Before we go deeper – we should tell you what's on his mind.

Dalio, who grew up middle class, is alarmed about the growing divide between the haves and have-nots. He points out that over the span of a decade, America's lowest paid workers had just a 14 percent chance of rising to the middle class.

Bill Whitaker: What has happened to the American dream?

Bill Whitaker: But what's not working?

Ray Dalio: it's not redistributing opportunity. We can call it a wealth gap, you can call it an income gap And so I think that if I was the president of the United States, or it has to come from the top, what I would do is recognize that this is a national emergency.

Ray Dalio: if you look at history if you have-- a group of people who have very different economic conditions -- and you have an economic downturn, you have conflict. In the '30s, for example, you had four major countries that were democracies, that chose not to be democracies because they wanted leadership to bring order to the conflict. I'm not saying we're going to go there. I'm saying that right now – it's a huge issue it's unfair and, at the same time, it's unproductive, and at the same time it's-- threatens to split us.

Dalio spends a lot of time thinking about where the markets and the world are going here, at the financial powerhouse he built. Bridgewater Associates is tucked in the woods of Connecticut at the confluence of two rivers popular for fishing. It's 50 miles from the chaos of Wall Street.

Bill Whitaker: So you play it calmly?

Ray Dalio: Calmness-- critical. You know, the emotions'll kill you.

At 69, Ray Dalio bears little resemblance to any Wall Street shark. He's more like a quirky professor. Dalio has joined fellow billionaire Bill Gates and others in their belief that the concentration of wealth in fewer and fewer hands is a threat to democracy.

Bill Whitaker: So should taxes on people like you be raised?

Bill Whitaker: You say of course.

Ray Dalio:  Of course, One way or another, the important thing is to take those tax dollars and make them productive.

Bill Whitaker: Very, very recently the idea has been that cutting taxes on people like you will promote productivity.

Bill Whitaker: So, it's gotta be through taxation?

Ray Dalio: Yes. Am I saying something that's controversial?

Bill Whitaker: It's just strange to hear it come from the mouth of a billionaire.

Ray Dalio: I lived the American dream ya know?

His father was a jazz musician. His mom, a homemaker. Dalio bought his first stock when he was 12, with money he earned as a golf caddy.

Today, Dalio's firm manages $160 billion. It has all the excitement of an insurance agency. Dalio's analysts don't chase the gyrations of the market. Instead, they quietly study centuries of history looking for patterns in stocks, politics, anything to help buy winning investments. Dalio is especially bullish on China, which he predicts will be the greatest economy of the 21st century and America's greatest rival.

"Capitalism needs to be reformed. It doesn't need to be abandoned."

Last year, his global approach helped him earn a remarkable 15 percent for his clients, while the Dow dropped 6 percent.

Bill Whitaker: We see the successful Ray, but you hit some bumps along the road, on the way here?

Bill Whitaker: --like in the '80s, you kind of bottomed out?

Back then, he was a Wall Street whiz kid, absolutely certain a depression was on the horizon.

Bill Whitaker: I read that you called yourself an "arrogant jerk?"

Bill Whitaker: You-- your--

Ray Dalio: Yeah. and it was one of the best things, really, that ever happened to me, because it changed my whole approach to decision-making. it gave me the humility that I needed to balance with my audacity.

He took note of his failures and other lessons over the next 25 years and wrote "Principles," published by Simon and Schuster, a division of CBS. Two million copies of the book have been sold worldwide. It's Dalio's recipe for creating, what he calls, an "idea meritocracy."

Ray Dalio: So, what I mean is that I want a system in which the best ideas win out. And I would describe it as tough love, and I want to get there through radical truthfulness. In other words, people say what they honestly mean And radical transparency allows people to see things for themselves.

Bill Whitaker: So does this get rid of the office backstabbing--

Ray Dalio: Oh yeah. There's a rule here that you can't talk behind anybody's back. You do that three times, you're outta here.
Everybody at Bridgewater is monitoring everybody else almost all the time. We saw it at this meeting where workers and managers gave each other grades in real time.

Bill Whitaker: What sort of grades do you get?

There's a bit of a big brother vibe here. That camera isn't ours, it's theirs.  Nearly every meeting is recorded and scrutinized.

Bill Whitaker: Can you understand somebody looking at it from the outside, that sounds a little strange?

Bill Whitaker: It may be even a little creepy.

Ray Dalio: I totally understand how that could sound that way. you also have to understand that when you're doing this awhile and you look at other organizations and people are not open with each other and they're hearing a lot of spin, that from this point of view, that seems creepy.

Bill Whitaker: Do you have a high turnover?

Ray Dalio: Some people describe it as an intellectual Navy SEALs, you know. You go, a certain percentage are not gonna make it, and that's the way it is.

Think what you want, it's hard to argue with success. Bridgewater has made money for its clients 25 of the last 28 years.

Whether it's investing or exploration, Dalio goes his own way.

Bill Whitaker: While your fellow billionaires, Bezos, Branson, Elon Musk, they're all going into outer space. They're headed towards Mars and the moon. You choose to go down. Why is that?

Ray Dalio: Well, I-- as I say, I find-- ocean exploration a lot more exciting, a lot more important than space exploration, right? And then you think about it affects our lives so much more.

Dalio routinely hosts scientists who have found new creatures in the deep, like these that generate their own light. There was also this off the coast of Japan, a live 26-foot-long giant squid. We didn't have that kind of luck, but we had plenty of company.

Bill Whitaker: What kind is this?

Bill Whitaker: Wow, look at this.

As we went deeper, the ocean became barren. The coral once here was gone. A symptom of nature out of balance. And Dalio says a metaphor for what's happened to economic opportunity.

So lately, he's putting his money into public education to help restore economic balance to his home state.

His wife Barbara handles that portfolio. In April, the Dalio Foundation pledged a record $100 million to Connecticut schools.

Bill Whitaker: So, you and Ray are partners in this endeavor?

Barbara Dalio: We're not partners. Ray has his passion, which is the ocean, and my passion is public education.

Bill Whitaker: So, he does-- he does his passion and you do yours.

The program takes a page out of Bridgewater's investing strategies by relying on data to closely follow student performance and behavior so teachers can help at risk students. It's paid dividends in just three years. The number of kids on track to graduate in this high school is up by 8 percent.

Ray Dalio has agreed to donate half his $18 billion fortune to charity to help mend the system that made him rich. With the right and left at each other's throats, Dalio warns time is running short.

Bill Whitaker: American capitalism is not sustainable. That's what I hear you say--

Ray Dalio: Yes, I don't think it's sustainable. We're at a juncture. we can do it together, Or we will do it in conflict, that there will be a conflict between the rich and the poor.

Bill Whitaker: Which path do you think we will take?

Ray Dalio: I play probabilities. And I would say it's probably 60-40, 65-35 that it will probably be done badly and that it would be a bad path. But I'm saying it doesn't have to be that way. by realizing that it is a juncture maybe we can nudge just a little bit the probabilities so that we can have a better outcome.