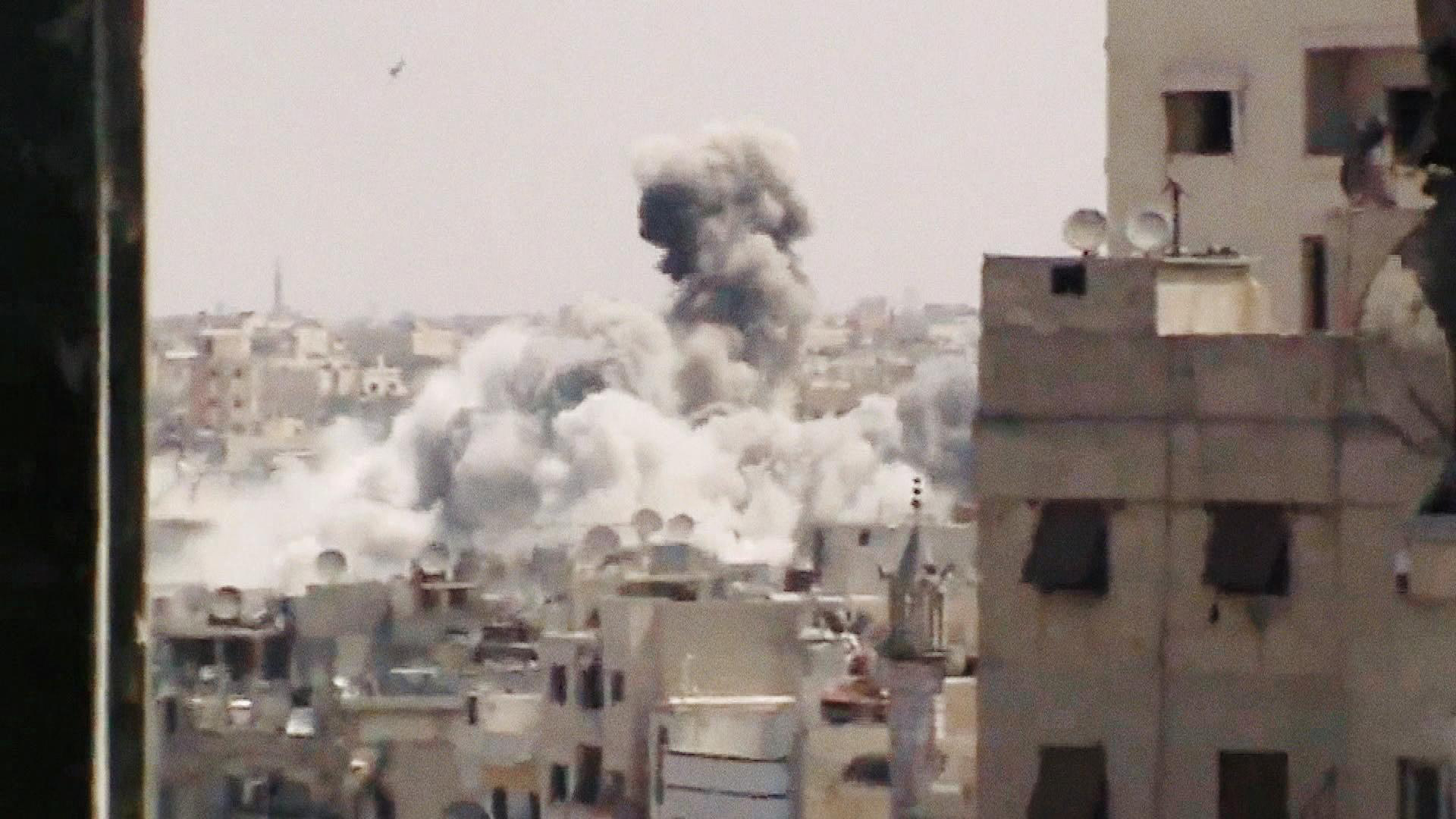 Correspondent Bob Simon - -who has reported from war zones and revolutions all over the world -- finds himself in a strange situation this week.

Instead of reporting on the civil war in Syria from inside that country, Bob and his team are telling this brutal story through the eyes of Syrian filmmakers.

For a reporter accustomed to being on the front lines, Bob concedes that it's "very strange, and, frankly, I think we all felt a little bit guilty that we were doing a story about Syria and we were just hovering around the border."

In the end though, the ability to tell this important story is what matters most, and Simon says he is impressed by the quality of the footage and by the bravery of the filmmakers.

"It's definitely as raw as it gets," he says.

The following is a script of the video produced for 60 Minutes Overtime by Magalie Laguerre-Wilkinson and Craig Crawford.

This week on 60 Minutes, Bob Simon and his team report about Syria through the eyes of two Syrian filmmakers who have documented the war there. This was the first for Simon -- a CBS News correspondent, who for more than 40 years has covered conflicts all over the world -- but this war was one he could only cover at a distance.

Bob Simon: It was very strange. And, frankly, I think we all felt a little bit guilty that we were doing a story about Syria and we were just hovering around the border. First of all, going into a place like Homs today is just -- it's not dangerous; it's suicidal.

Michael Gavshon: Syria's not very accessible to journalists, as you know. So, these films are a unique kind of eye into Syria. These people who made these films were living and breathing the revolution. And for as long as they could, they were filming as much as they could.

Michael Gavshon: My name's Michael Gavshon. And I'm one of the producers of a piece that we're doing this week called "Inside Homs."

Magalie Laguerre-Wilkinson: You never actually met physically your central character, Basset, in the film. But we all seem to get to know about his ups and downs through this story. How did you convince the powers that be here at 60 Minutes to put this on?

Michael Gavshon: Well, about 18 months ago when I first started seeing snippets of this film about Basset in Homs, I was telling our principals here in New York about what this chap was about and the fact that his story is a story of Syria. Here's this 19-year-old Syrian National Youth goalkeeper who gets captured by the spirit of the uprising and, in fact, captures the spirit of the uprising.

Magalie Laguerre-Wilkinson: Bob, when Michael Gavshon, came to you with the idea to do this story, what was your reaction?

Bob Simon: My reaction was, "absolutely." Because I knew, just because I know that area of the world, I knew that we weren't getting the slightest taste of what was really going on in Syria. But when what you see, what Assad and his regime are doing to human beings, it's an entirely new story, an entirely new dimension.

Magalie Laguerre-Wilkinson: Tell me about the evolution of Basset. We see him starting out as a pretty secular person, well-known. But he's evolved into a relatively militant character. He wasn't interested in an Islamic state, which is what ISIS is interested in. He wanted to get rid of Assad. Now he's angry at the West because he hasn't gotten the help that he's asked for.

Bob Simon: He's been angry at the West for some time. It's not only at the governments that he's angry at, he's angry at all of us. The media gave him a lot of play in the early days, but now he's in Syria. We were at the Turkish/Syrian border. And while we had all the apparatus, phones and Skype and all that, to make contact with him, he didn't wanna have anything to do with us.

Magalie Laguerre-Wilkinson: The West had let him down.

Bob Simon: The West had let him down entirely.

Magalie Laguerre-Wilkinson: Bob, in this era of reality TV, this is about as raw as it gets.

Bob Simon: It's definitely as raw as it gets. And the documentaries that we saw that are the foundation of our story frankly, they were very difficult for me to watch. And I've seen a lotta stuff.

Michael Gavshon: There are scenes that Syrians are experiencing every day.

Magalie Laguerre-Wilkinson: You have a very poignant interview with Simav. She's so young and has seen so much.

Michael Gavshon: Well, Simav is the most extraordinary woman. She chose to stay in Homs. She was there for the entire duration of the siege. She was not only filming whatever she could; she started a couple of schools, she worked with the wounded, she helped wherever she could.

Bob Simon: She was, incidentally, not a photographer, not a filmmaker, not a journalist. She was working in a shop.

Magalie Laguerre-Wilkinson: Have you ever met someone as brave?

Bob Simon: I've met a lotta brave people, but she's utterly remarkable. During the siege, everyone was starving. Aside from the amenities which one can live without, like running water and heat it's tough, but you can do without it. But food? They were eating grass. She was so delighted whenever we came across a patch of grass. It brought back memories, and believe it or not, happy memories. Because when she found grass she had something to eat.

Magalie Laguerre-Wilkinson: We've seen some brutal stuff coming out of Syria on evening newscasts. But it's a minute and a half, a minute 40, a minute 45. This is different. What's so different about this?

Bob Simon: The difference is that it's 90 minutes. And that's not 90 minutes of just odd selections of brutality. It's 90 minutes taken off YouTube, taken off stuff that's been shot almost all by amateurs in Syria, which has been weaved together in a coherent documentary form, so that you are immersed in it not for a couple minutes, but for 90 minutes. And that makes all the difference. You're watching it and you just become part of what you're watching. And the horror deepens by the minute.

Why did Hitler fear modern art?
Thanks for reading CBS NEWS.
Create your free account or log in
for more features.
View CBS News In
CBS News App Open
Chrome Safari Continue
Be the first to know
Get browser notifications for breaking news, live events, and exclusive reporting.