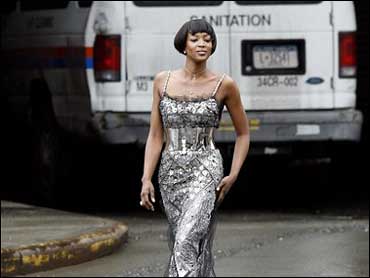 The Baltimore Ravens backed up the talk.

Members of the Baltimore defense had maintained all week that the Giants would not be able to move the football. They were right.

Game MVP Ray Lewis was at the heart of the defensive effort.

"We didn't just break records, we shattered them," Lewis said. "We dominated literally. This is what you work your whole life for. You come from childhood, dreaming whatever you want it to be, but now, at 25, to be a world champion, what else can I dream of?"

The Ravens intercepted Kerry Collins four times, the final pick returned 49 yards for a touchdown by Duane Starks, the first of three TDs on three plays late in the third quarter.

The other two were kickoff returns for scores by Ron Dixon of New York and Jermaine Lewis of Baltimore, the first time that's ever happened in a Super Bowl.

Otherwise, Lewis, and the rest of the Baltimore defense smothered the Giants, who scored 41 points and punted only once against Minnesota in the NFC title game.

The victory gave 75-year-old Art Modell his first Super Bowl win in 40 years as an owner. He won one NFL title in 35 seasons in Cleveland before moving his franchise to Baltimore in 1996, but he had never been to a Super Bowl, losing two close AFC title games in Cleveland.

"To the people of Baltimore, to the people of Maryland. This is for you," said Model, who stood on the podium hugging son David as he received the Vince Lombardi Trophy from commissioner Paul Tagliabue.

Modell won by beating his good friend Wellington Mara of the Giants, who has 75 seasons in the NFL.

So effective was Baltimore's defense that the New York offense never got inside its 29. The game might as well have been stopped after Trent Dilfer's 38-yard touchdown pass to Brandon Stokley with 6:50 left in the first quarter gave the Ravens a 7-0 lead. It stayed that way for most of the first half.

"I didn't throw the ball very well," Dilfer said. "But we talked about making big plays and we made them when we needed them. We aren't pretty, like St. Louis, but we got the job done. This is a team that puts wins ahead of stats."

Brad Maynard of the Giants and Kyle Richardson each ended up breaking the record of nine punts. There were 21 punts (Maynard had 11, Richardson 10).

It was still 10-0 late in the third quarter when the game exploded.

Starks started it by stepping in front of Amani Toomer on a first down, grabbing the ball and racing 49 yards untouched to the end zone to give Baltimore a 17-point lead.

Game over? Not quite.

Dixon, who returned the opening kickoff for a touchdown in New York's playoff win against Philadelphia, returned the kickoff 97 yards for a score.

But then Jermaine Lewis grabbed Brad Daluiso's kickoff, weaved through the Giants and ran up the sideline for an 84-yard TD and another 17-point lead, 24-7.

"The emotional flop had to be devastating to them," Ravens coach Brian Billick said.

Jamal Lewis, who carried 29 times for 102 yards, added a 3-yard run in the fourth quarter and Matt Stover, who had a 47-yrd field goal in the second quarter, added a 38-yarder in the fourth.

Neither team had a first down in its first two possessions, but Baltimore kept inching closer to the New York goal on the exchange of punts.

The Giants got a first down on their third possession, when they were pinned back against their goal line. But they had to punt and the Ravens got a 34-yard return from Jermaine Lewis that gave them a first down at the New York 41 to start the series.

On the second play, Dilfer found Stokley behind Jason Sehorn from 38 yards for the game's first score. But that was one of the few times the Baltimore quarterback was on target, twice missing open receivers behind the Giants' secondary.

Five minutes into the second quarter, New York's Jessie Armstead picked off a poorly thrown Dilfer pass and ran it into the end zone. But the Giants' Keith Hamilton was called for holding on the play, negating the interception.

The Ravens got their second big play late in the first half, a 44-yard pass from Dilfer to Qadry Ismail that set up Stover's 47-yard field goal that made it 10-0.

The Giants mounted their first threat after that, as Tiki Barber ran 27 yards to the Baltimore 29. But on the next play, Collins went for the end zone and Chris McAlister intercepted to send the Ravens into intermission with the 10-point lead.

"I didn't expect to turn over the ball five times," Giants coach Jim Fassel said. "You can't play football like that. When you do that against a team like that, this is what happens."

(c) MMI, Viacom Internet Services Inc., All Rights Reserved. This material may not be published, broadcast, rewritten, or redistributed. The Associated Press contributed to this report