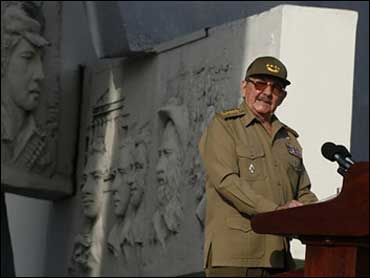 Interim leader Raul Castro led tens of thousands of loyalists in celebrations marking the launch of Cuba's revolution Thursday, filling in for his ailing brother, Fidel, as his provisional government took on further airs of permanence.

Looking presidential and delivering what can only be called a "State of the Union Address" in front of tens of thousands in the central Cuban city of Camaguey, Cuba's 76-year-old acting president and defense minister cautioned Cubans not to expect immediate solutions to all their problems, reports CBS News producer Portia Siegelbaum.

Among the problems he singled out was low wages, saying, "wages today are markedly not enough to satisfy all needs and have thus ceased to play a role in ensuring the socialist principle that each should contribute according to their capacity and receive according to their work," Siegelbaum reports. He went on to pinpoint what many see as the most damaging result of low wages: "This has bred forms of social indiscipline and tolerance, which, having taken root prove difficult to eradicate, even after the objective causes behind them are eradicated."

Many Cubans, disgusted with their inadequate wages, problems with housing and transportation work half-hardily resulting in low production and poor services, Siegelbaum reports.

Siegelbaum reports that Raul Castro also addressed the future of Cuba's relations with the United States. "The new administration will have to decide whether it will maintain the absurd, illegal and failed policy against Cuba or if it will accept the olive branch that we offered" last December 2. "That is when we reasserted our willingness to discuss on equal footing the prolonged dispute with the government of the United States, convinced that this is the only way to solve the problems of the world, every more complex and dangerous."

Fidel, who turns 81 next month, has for decades given hours-long speeches to mark Cuba's top holiday. Last year, he addressed crowds in two separate cities on Revolution Day.

Fidel Castro He has begun penning essays dubbed "Reflections of the Commander in Chief" every few days, but appears to be in little hurry to return to power.

Many people wore red T-shirts and waved miniature Cuban flags over their heads during the ceremony. "Viva Fidel! Viva Raul!" they screamed, in that order. Speaker after speaker spoke about Fidel, celebrating his life, repeating that he was attending the celebration in spirit and wishing him well.

But it was hard to find much disappointment that the elder Castro failed to show up.

"Raul converses well with the people and that gives us a special lift," said Gilberto Guerrero, a retired 74-year-old sugar cane worker. "There's so much happening in the world, but Raul speaks directly to the people of Cuba."

"I am certain Fidel is recovering but there's no problem because we have Raul," said Candida Alvarez, a 76-year-old retiree who hung a string of paper red, white and blue Cuban flags from the front door of her wooden home near Camaguey's historic center.

Alvarez, who works with neighborhood communist officials to mediate disputes between residents, said "Fidel will always be the boss, but now Raul is the boss too."

"He's been there for a year and has gained popularity, earned the warmth of the people," she said.

Raul Castro has said he's not fond of long speeches and is seen as a pragmatist. He has said in past official interviews and public appearances that he would be willing to discuss improving relations with Washington, whose 45-year-old embargo prohibits U.S. tourists form visiting the island and chokes off almost all trade between both countries.

"We know that what Raul says will be the guide for our revolutionary direction," said Jesus Garcia, president of Camaguey's provincial assembly. "What he says is up to him, but they will be important reflections and we will be ready and listening closely."

"Raul Castro's biggest success over the past year has been keeping this country stable," reported Cobiella from Havana. "He's tweaked the state-run system. He's talked about cleaning up the economy. But, really, it's widely believed as long as Fidel Castro is alive, he will have the final say on the direction this country will take."

Cuban flags and black-and-red flags symbolizing the July 26 Movement that launched the revolution were plastered on almost everything stationary, hanging in store windows and fluttering from the crumbling balconies of pastel-colored houses.

Cuba's third-largest city and the capital of a cattle-producing province of the same name, Camaguey is hosting the yearly ceremony that marks the July 26, 1953, attack by both Castros and a ragtag rebel band on the Moncada army barracks in the eastern city of Santiago.

The uprising quickly degenerated into a disaster and many rebels were shot dead during the chaotic fighting or captured and killed a short time later by government forces. But it became a rallying cry for a subsequent revolutionary movement that gained new strength and eventually toppled dictator Fulgencio Batista in January 1959.