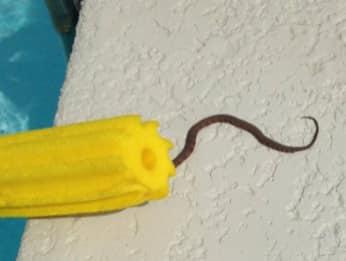 Firefighters in Buckeye, Arizona, are warning all pool owners of something dangerous that could be lurking in their pool toys. The City of Buckeye Fire Department issued a "pool noodle alert" on Facebook  last week, after one local family shared their own horrifying story.

"Apparently, 2 pool noodles were left outside of the pool up against their cinderblock wall. The next time they went to use the pool, the pool noodles were picked up and brought to the swimming pool," the fire department wrote. "Out popped a rattlesnake."

Fortunately, the family says the snake did not attack. But a few rattlesnake babies were still lurking inside.

"After some research, we found that there have been reports of snakes... actually laying their eggs inside the pool noodle itself or around pool noodles that have been left outdoors near bushes or block fences," the fire department wrote. They later clarified that since rattlesnakes do not lay eggs, such incidents would have involved other types of snakes. The baby rattlesnakes in this family's noodles must have crawled in themselves, or else the mother gave birth to them there.

"If you come into contact with a rattlesnake, or any other type of snake, stay calm," the fire department advised in their warning post. "One of the worst things you can do when coming across a rattlesnake is to start panicking. Snakes rely on vibrations in the ground to determine where you are. If you start moving fast and abruptly, you'll only scare the snake more," the department says.

The department listed several tips for dealing with snakes. Give the snake space, walk away without frightening it, and keep in mind that rattlesnakes can coil up and then strike at a great length, so keep as much distance as possible.

If you hear a rattling sound in and around your pool noodle, that's a good indication that a snake is around. Don't run, stay still, the department says. The snake will probably stop rattling and slither off once it calms down. "Humans are much bigger than snakes, so they don't see any benefit in biting if it doesn't need to protect itself. They'll more than likely slither away to safety on their own," the fire department writes.

One family's bad pool day has helped spread the word about the possible dangers lurking in a place you might not expect. The fire department's warning about pool noodles has been shared hundreds of times, helping pool owners know what to look out for.