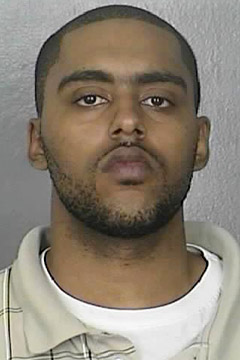 (CBS/AP) MADISON, Va. - A Virginia man who is accused of a 2011 triple murder, reportedly attacked his attorney in court on Wednesday during a hearing to determine his mental competency to stand trial.

Fifteen minutes into the hearing, Rashad Riddick, 25, allegedly began to punch his attorney, Joseph Flood, in the face. Riddick's attorneys had asked that his hand and feet be unrestrained for the hearing.

According to the Culpeper Star-Exponent, court security immediately tackled Reddick, toppling over the lawyers' table and breaking two legs on the table.

Flood reportedly screamed at security not to hurt Reddick.

The sheriff evacuated the courtroom, while security radioed for EMS to respond. No one else was injured, though the paper reports that Flood's bruises were apparent after a short recess. The extent of the lawyer's injuries were unknown, according to the Star-Exponent.

According to the Star-Exponent, Reddick is facing capital murder charges, and possible a death penalty sentence for the Feb. 11, 2011 shooting of his uncle, James Jackson, 55, his wife, Karen Lee Jackson, 53, and her daughter Chante Latrice Davis, 26.