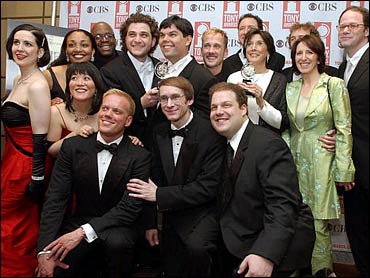 The irreverent little show "Avenue Q" came out a surprise winner as best musical at this year's Tony Awards, where the much more expensive and lavishly mounted "Wicked" had been favored.

"Tonight was about one thing - Broadway got its heart back," Jeffrey Seller, one of the overjoyed producers of "Avenue Q," said after the unexpected victory. Besides the top musical prize, "Avenue Q" also won for its catchy score (Robert Lopez and Jeff Marx) and cheeky book (Jeff Whitty), which chronicles the misadventures of young people in an outer borough of New York.

The show had mounted a playful if spirited effort for the best-musical prize, draping its theater in red, white and blue bunting, handing out buttons that proclaimed, "Don't suck. Vote Q," and sending up its own persistent Tony Award campaign in newspaper ads.

"I Am My Own Wife," Doug Wright's gender-bending tale of survival, was named best play. Its sole performer, Jefferson Mays, was named best actor for his portrayal of not only German transvestite Charlotte von Mahlsdorf but some 40 other characters in the drama.

Two of the women in the revival of Lorraine Hansberry's "A Raisin in the Sun" came away with Tonys - and one of them walked into the history books. Phylicia Rashad, who portrays the matriarchal Lena Younger, became the first black actress to win for a leading dramatic role.

"I really hadn't considered that," the actress said. "This is an honor for any actress to win, and that's the truth of it."

In her dignified, almost majestic acceptance speech, Rashad said, "Often I've wondered what does it take for this to happen. And now I know. It takes effort and grace. ... And in my life that grace has taken numerous forms. The first was the family into which I was born, parents who loved and wanted me, and a mother who fought fearlessly, courageously, consistently so that her children above all else could realize their full potential as human beings."

Audra McDonald, who plays Rashad's daughter-in-law in "Raisin," won her fourth Tony, this time for featured actress. Her others were for roles in the Lincoln Center revival of "Carousel," "Master Class" and "Ragtime."

No one production dominated the evening, which was broadcast by CBS from Radio City Music Hall. Ten shows shared the 21 competitive awards, with "Assassins," taking home the most - five - including best musical revival. It was a sweet victory for the Stephen Sondheim-John Weidman musical, which had been critically derided by many reviewers during its initial run off-Broadway in the 1990-91 season.

The show about presidential killers also won the featured-actor musical prize for Michael Cerveris, who plays John Wilkes Booth, the lighting award for Jules Fisher and Peggy Eisenhauer, and orchestrations for Michael Starobin. Joe Mantello won for his direction.

Last year, Mantello captured the direction-play prize for "Take Me Out." This year, that award went to Jack O'Brien for "Henry IV," which also picked up the play revival prize.

Besides serving as the exuberant host of the awards program, Hugh Jackman won the actor-musical prize for portraying flamboyant entertainer Peter Allen in "The Boy From Oz."

"Peter, it's an honor to play you and I dedicate this Tony to you," Jackman said in saluting Allen who died of AIDS in 1992.

"Wicked," at $14 million one of the season's most expensive productions, managed three prizes, including the actress-musical award for its green witch played by Idina Menzel, who acknowledged she had once played Dorothy in a fourth-grade school production of "The Wizard of Oz." The musical's other awards were for its opulent sets (Eugene Lee) and costumes (Susan Hilferty).

"Caroline, or Change" managed only one prize, featured actress-musical, won by Anika Noni Rose, who plays the defiant daughter in the Tony Kushner-Jeanine Tesori musical.

Other shows with just a single Tony win were the revival of "Wonderful Town," receiving the choreography prize for Kathleen Marshall, and "Frozen," picking up the featured-actor prize for Brian F. O'Byrne, who portrays a serial killer in Bryony Lavery's harrowing drama.